This week I got a new book in the mail: The Linux Programming Interface. My awesome coworker Arshia recommended it to me so I bought it! It’s written by the maintainer of the Linux man-pages project, Michael Kerrisk. It talks about the Linux programming interface as of kernel 2.6.x. 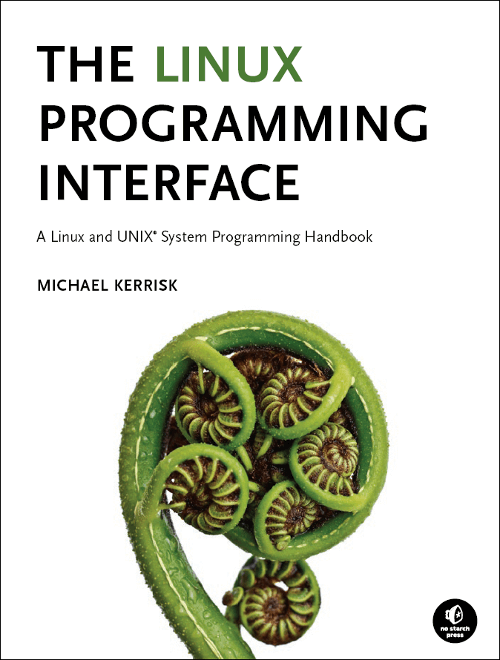 In the contributing guidelines (you can contribute to the linux man pages!! mind=blown), there’s a list of missing man pages that would be useful to contribute. It says:

I thought this was a cool reminder of how you can learn a lot by documenting something & writing small test programs!

But today we’re going to talk about something I learned from this book: the select, poll, and epoll system calls.

This book is huge: 1400 pages. I started it at Chapter 63 (“alternative I/O models”) because I’ve been meaning to understand better what’s up with select, poll and epoll for quite some time. And writing up things I learn helps me understand them, so here’s my attempt at explaining!

For example if you’re writing a web server in node.js on Linux, it’s actually using the epoll Linux system call under the hood. Let’s talk about why, how epoll is different from poll and select, and about how it works!

Servers need to watch a lot of file descriptors

Suppose you’re a webserver. Every time you accept a connection with the accept system call (here’s the man page), you get a new file descriptor representing that connection.

If you’re a web server, you might have thousands of connections open at the same time. You need to know when people send you new data on those connections, so you can process and respond to them.

You could have a loop that basically does:

The 3 system calls that let you ask Linux to monitor lots of file descriptors are poll, epoll and select. Let’s start with poll and select because that’s where the chapter started.

These 2 system calls are available on any Unix system, while epoll is Linux-specific. Here’s basically how they work:

The first surprising thing I learned from this chapter are that poll and select fundamentally use the same code.

I went to look at the definition of poll and select in the Linux kernel source to confirm this and it’s true!

They both call a lot of the same functions. One thing that the book mentioned in particular is that poll returns a larger set of possible results for file descriptors like POLLRDNORM | POLLRDBAND | POLLIN | POLLHUP | POLLERR while select just tells you “there’s input / there’s output / there’s an error”.

select translates from poll’s more detailed results (like POLLWRBAND) into a general “you can write”. You can see the code where it does this in Linux 4.10 here.

The next thing I learned is that poll can perform better than select if you have a sparse set of file descriptors .

To see this, you can actually just look at the signatures for poll and select!

There are a lot more specific details about how poll and select are different in the chapter but those were the 2 main things I learned!

why don’t we use poll and select?

Okay, but on Linux we said that your node.js server won’t use either poll or select, it’s going to use epoll. Why?

On each call to select() or poll(), the kernel must check all of the specified file descriptors to see if they are ready. When monitoring a large number of file descriptors that are in a densely packed range, the timed required for this operation greatly outweights [the rest of the stuff they have to do]

Basically: every time you call select or poll, the kernel needs to check from scratch whether your file descriptors are available for writing. The kernel doesn’t remember the list of file descriptors it’s supposed to be monitoring!

Signal-driven I/O (is this a thing people use?)

The book actually describes 2 ways to ask the kernel to remember the list of file descriptors it’s supposed to be monitoring: signal-drive I/O and epoll. Signal-driven I/O is a way to get the kernel to send you a signal when a file descriptor is updated by calling fcntl. I’ve never heard of anyone using this and the book makes it sound like epoll is just better so we’re going to ignore it for now and talk about epoll.

Before we talk about epoll, we need to talk about “level-triggered” vs “edge-triggered” notifications about file descriptors. I’d never heard this terminology before (I think it comes from electrical engineering maybe?). Basically there are 2 ways to get notifications

Okay, we’re ready to talk about epoll!! This is very exciting to because I’ve seen epoll_wait a lot when stracing programs and I often feel kind of fuzzy about what it means exactly.

The epoll group of system calls (epoll_create, epoll_ctl, epoll_wait) give the Linux kernel a list of file descriptors to track and ask for updates about activity on those file descriptors.

Here are the steps to using epoll:

In the book there’s a table comparing the performance for 100,000 monitoring operations:

So using epoll really is a lot faster once you have more than 10 or so file descriptors to monitor.

I sometimes see epoll_wait when I strace a program. Why? There is the kind of obvious but unhelpful answer “it’s monitoring some file descriptors”, but we can do better!

First – if you’re using green threads or an event loop, you’re likely using epoll to do all your networking & pipe I/O!

For example, here’s a golang program that uses epoll on Linux!

Here you can see the golang run time using epoll to do a DNS lookup:

Basically what this is doing is connecting 2 sockets (on file descriptors 3 and 4) to make DNS queries (to 127.0.1.1:53), and then using epoll_ctl to ask epoll to give us updates about them

Then it makes 2 DNS queries for example.com (why 2? nelhage suggests one of them is querying for the A record, and one for the AAAA record!), and uses epoll_wait to wait for replies

So one reason your program might be using epoll “it’s in Go / node.js / Python with gevent and it’s doing networking”.

What libraries do go/node.js/Python use to use epoll?

I liked these 3 posts by Marek:

In particular these talk about how epoll’s support for multithreaded programs has not historically been good, though there were some improvements in Linux 4.5.

I learned quite a few new things about select & epoll by writing this post! We’re at 1800 words now so I think that’s enough. Looking forward to reading more of this Linux programming interface book and finding out more things!

Probably there are some wrong things in this post, let me know what they are!

One small thing I like about my job is that I can expense programming books! This is cool because sometimes it causes me to buy and read books that teach me things that I might not have learned otherwise. And buying a book is way cheaper than going to a conference!