I’ve been learning about Kubernetes at work recently. I only started seriously thinking about it maybe 6 months ago – my partner Kamal has been excited about Kubernetes for a few years (him: “julia! you can run programs without worrying what computers they run on! it is so cool!“, me: “I don’t get it, how is that even possible”), but I understand it a lot better now.

This isn’t a comprehensive explanation or anything, it’s some things I learned along the way that have helped me understand what’s going on.

These days I am actually setting up a cluster instead of just reading about it on the internet and being like “what is that??” so I am learning much faster :)

I’m not going to try to explain what Kubernetes is. I liked Kelsey Hightower’s introductory talk at Strange Loop called “Managing Containers at Scale with CoreOS and Kubernetes”, and Kelsey has given TONS of great Kubernetes talks over the years if you want an intro.

Basically Kubernetes is a distributed system that runs programs (well, containers) on computers. You tell it what to run, and it schedules it onto your machines.

I drew a couple of “scenes from kubernetes” sketches today trying to explain very briefly things like “what happens when you add a new node?“. Click for a bigger version. 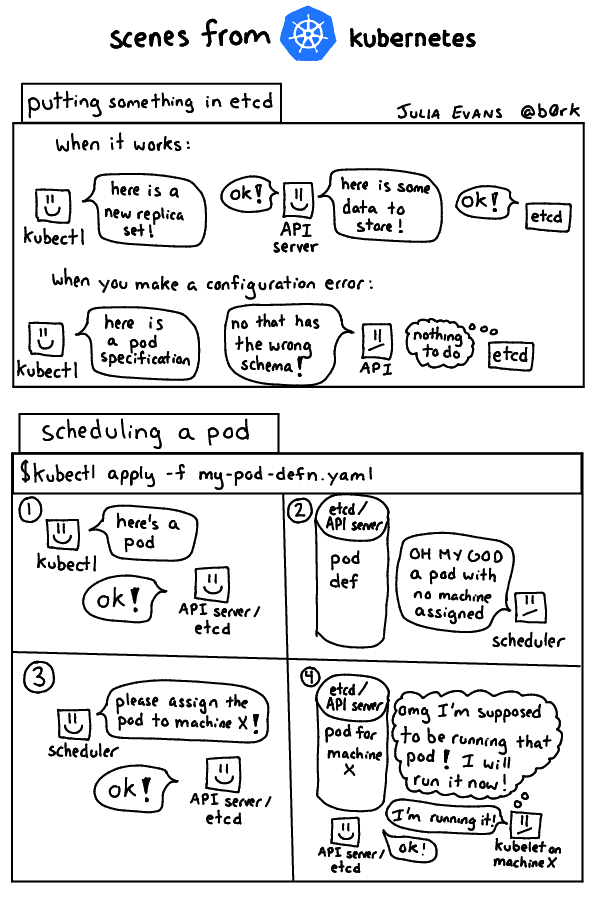 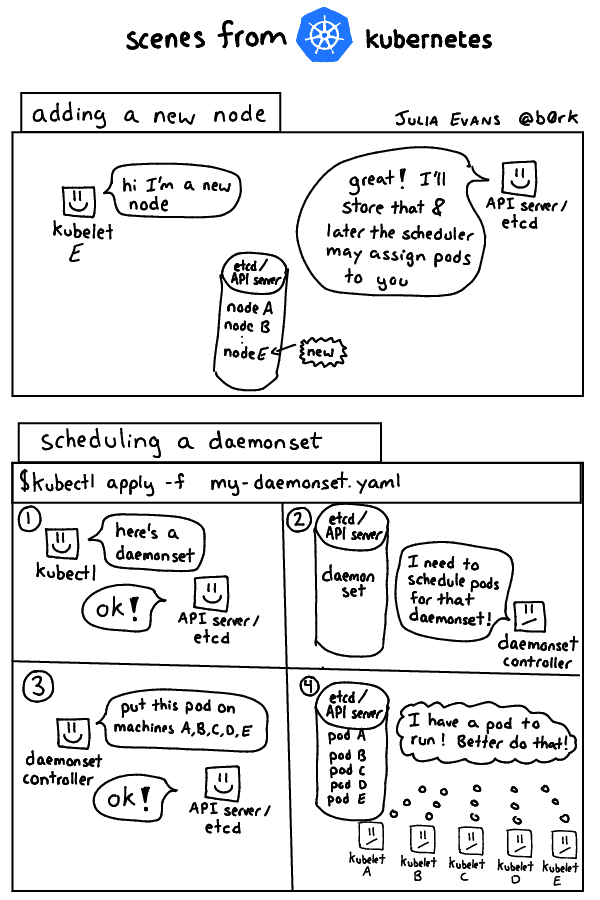 Kubernetes from the ground up

He basically walks you through how all the Kubernetes components work with each other one at a time – “look, you can run the kubelet by itself! And if you have a kubelet, you can add the API server and just run those two things by themselves! Okay, awesome, now let’s add the scheduler!” I found it a lot easier to understand when presented like this. Here’s the 3 post series:

Basically these posts taught me that:

but you should read them in detail if you want to understand how these components interact. Kubernetes stuff changes pretty quickly, but I think the basic architecture like “how does the API server interact with the kubelet” hasn’t changed that much and it’s a good place to start.

The next thing that really helped me understand how Kubernetes works is understanding the role of etcd a little better.

Every component in Kubernetes (the API server, the scheduler, the kubelet, the controller manager, whatever) is stateless. All of the state is stored in a key-value store called etcd, and communication between components often happens via etcd.

Similarly, if you want to put a container somewhere but you don’t care where:

When I understood that basically everything in Kubernetes works by watching etcd for stuff it has to do, doing it, and then writing the new state back into etcd, Kubernetes made a lot more sense to me.

The API server is responsible for putting stuff into etcd

Understanding etcd also helped me understand the role of the API server better! The API server has a pretty straightforward set of responsibilities:

That’s not too hard to understand!

It also manages authentication (“who is allowed to put what stuff into etcd?“) which is a pretty big deal but I’m not going to go into that here. This page on Kubernetes authentication is pretty useful, though it’s kind of like “HERE ARE 9 DIFFERENT AUTHENTICATION STRATEGIES YOU COULD USE”. As far as I can tell the normal way is X509 client certs.

the controller manager does a bunch of stuff

We talked about how the scheduler takes “here’s a pod that should run somewhere” and translates that into “this pod should run on Machine X”.

There are a bunch more translations like this that have to happen:

The controller manager basically bundles a bunch of different programs with different jobs together.

something isn’t working? figure out which controller is responsible and look at its logs

Today one of my pods wasn’t getting scheduled. I thought about it for a minute, thought “hmm, the scheduler is in charge of scheduling pods”, and went to look at the scheduler’s logs. It turned out that I’d reconfigured the scheduler wrong so it wasn’t starting anymore!

The more I use k8s, the easier it is to figure out which component might be responsible when I have a problem!

Kubernetes components can run inside of Kubernetes

One thing that kind of blew my mind was that – relatively core Kubernetes components (like the DNS system, and the overlay networking system) can run inside of Kubernetes! “hey, Kubernetes, please start up DNS!”

This is basically because in order to run programs inside Kubernetes, you only need 5 things running:

Once you have those 5 things, you can schedule containers to run on nodes! So if you want to run another Kubernetes component (like your overlay networking, or the DNS server, or anything else), you can just ask the API server (via kubectl apply -f your-configuration-file.yaml) to schedule it for you and it’ll run it!

Kubernetes networking: not impossible to understand

this page does a pretty good job of explaining the Kubernetes networking model “every container gets an IP” but understanding how to actually make that happen is not trivial!

When I started learning about Kubernetes networking I was very confused about how you give every container an IP address. In retrospect I think this was because I didn’t understand some of the fundamental networking concepts involved yet (to understand what an “overlay network” is and how it works you actually need to understand a bunch of things about computer networking!)

This summary of how Sophie debugged a kube-dns problem (misadventures with kube-dns) is a good example of how understanding fundamental networking concepts can help you debug problems.

The Kubernetes source code is all in Go which is great. The project moves pretty fast so stuff isn’t always documented (and you end up reading github issues sometimes to understand the current state of things), but in general I find Go code eays to read and it’s reassuring to know that I’m working with something written in a language I can understand.

the Kubernetes slack group is great

There’s a slack organization you can join by going to http://slack.kubernetes.io. I usually try to figure things out on my own instead of going there, but people there have been super super helpful when I have asked questions.