People sometimes tell me these days “wow julia, you are so good at drawing, it is so cool!”

I think this is kind of funny because, this is what happens when I try to draw animals.

But! There actually is a skill to explaining technical concepts to people with drawings. And I think I’ve become pretty good at that skill! It is just a different skill than like “drawing an elephant that looks like an elephant”

This post is about a few patterns I use when illustrating ideas about computers. If you are interested in using drawings to teach people about your very favorite computer topics, hopefully this will help you!

Let’s talk about how to structure cartoons and how to translate computer concepts into pictures!

Just to emphasize it again – this is basically the entire visual vocabulary I use. 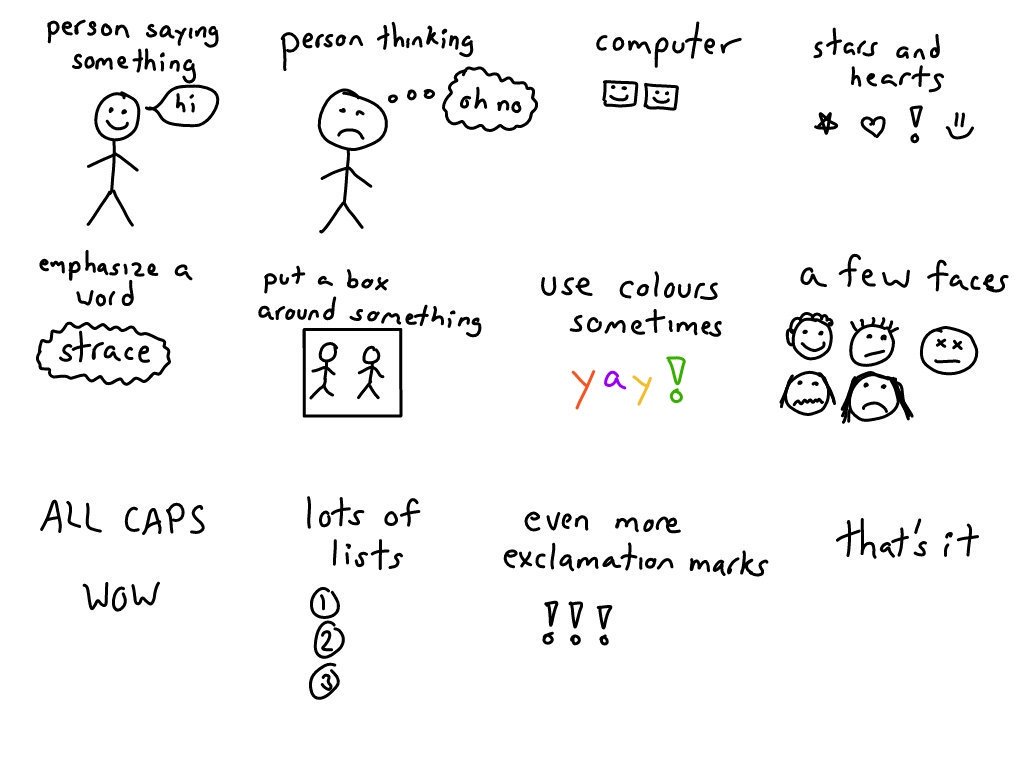 I think of tech cartooning as being about cartooning skills! I need to be good at:

Here are some tactics I like to use when drawing!

I do a lot of personification/anthropomorphization – I’ll take a system and turn it into a cast of characters who talk to each other. For example, here’s a scene from Kubernetes: the kubelet component is talking to the API server

This is useful because

Here’s part of the cast of characters from my networking zine: (a laptop! a router! an operating system! a program!) 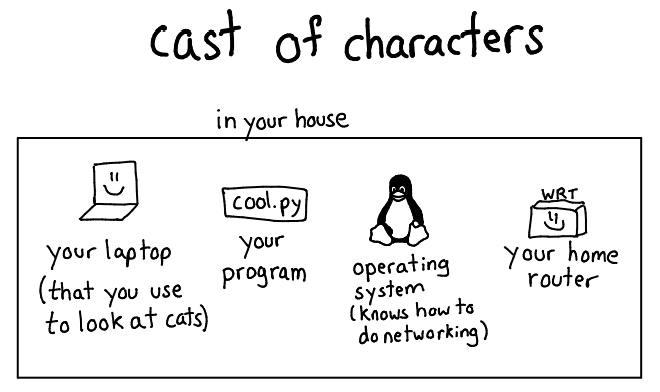 Taking a complicated computer system and breaking down “ok, these are 3 main important characters in this system” is incredibly useful.

The next step after just making your characters is to put them into scenes and make them interact with each other! So once you’ve established “the important characters here are the laptop, the DNS server, and the HTTP server”, you can show how they actually work together in real life.

and one with two programs who are both using the same mutex: 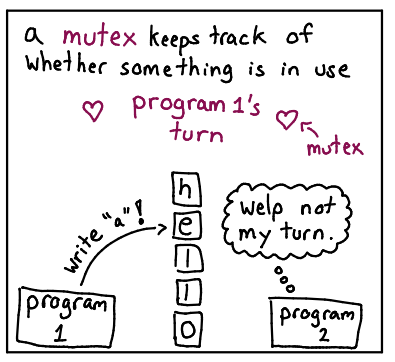 I think this scene (with program 2 thinking “not my turn yet”) is a pretty clear way to explain what happens when a mutex is in use, and I think it’s faster to understand what’s going on than if you read a paragraph explaining the same thing.

I make a LOT of lists (for example, this post itself is a “list of things I’ve learned about making comics :)“). A few examples:

and a list of strategies for asking good questions 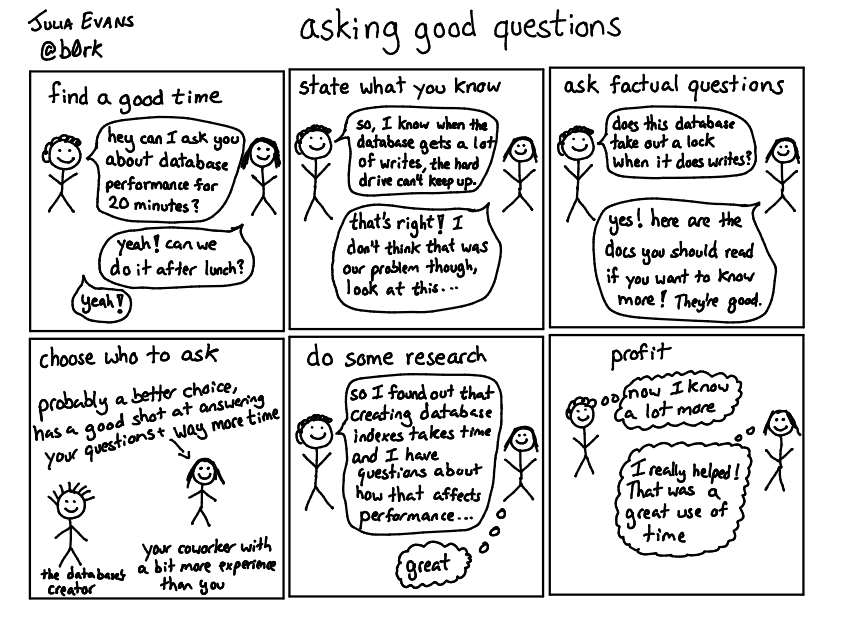 A few things I love about making lists:

A big part of the joy of hand drawing comics is that I can really easy make diagrams to explain what I mean! No fiddling with LaTeX or graphviz or anything.

Here’s part of a diagram I made to illustrate memory fragmentation: 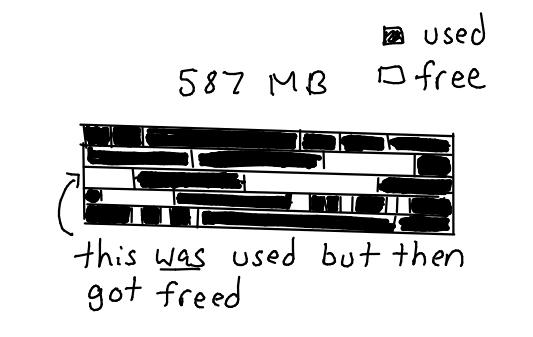 and a slightly more involved diagram showing the structure of a UDP packet: 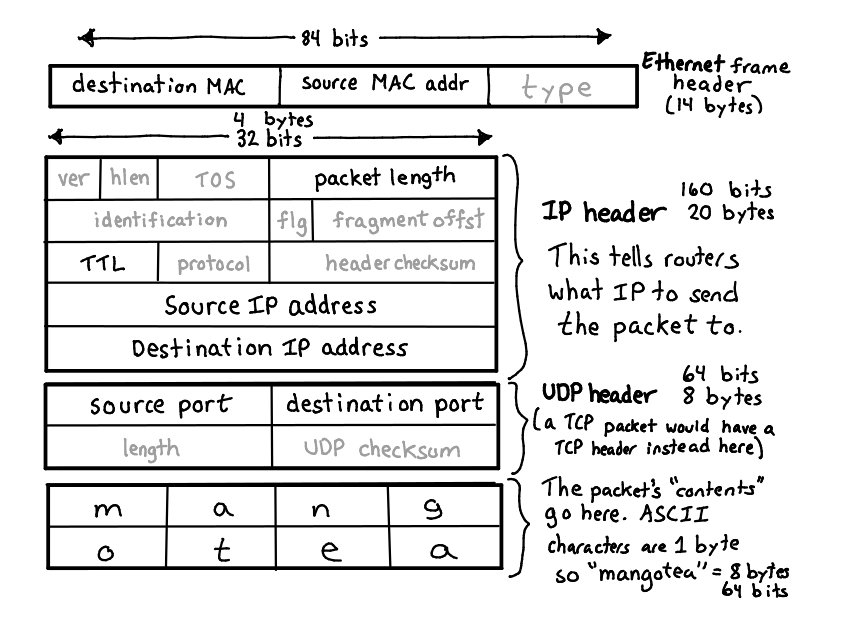 I love that I can use arrows / colours to emphasize things I think are important or give extra information. Like in this UDP packet diagram I greyed out fields that I thought were less important (like the “fragment offset”, which is definitely less important to understand than the source IP address).

Computers are often really confusing and surprising. This can be kind of frustrating (“what is my program even doing?!!?!“) and also kind of funny! I think all the weird stuff that happens is part of the joy of computers! So sometimes I try to make jokes.

Here’s the Kubernetes scheduler all worried because it noticed a pod that it hasn’t been scheduled. (scheduler: “OH NO! I was supposed to have done that already! julia will be mad!”) 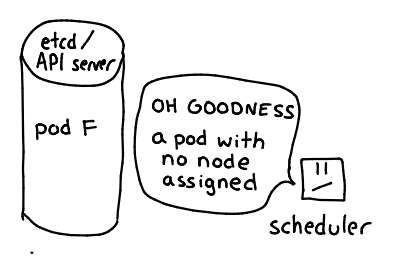 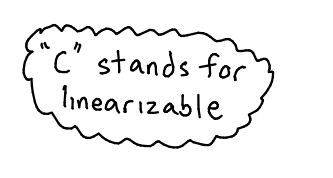 I like using cartoons but sometimes I’ll just write a paragraph. Here’s the start of a page about dstat: 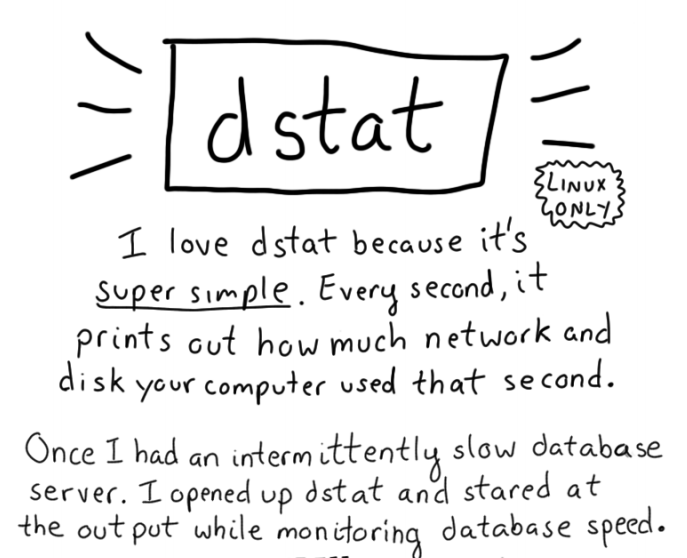 This basically just says “every second, dstat prints out how much network & disk your computer used that second”. I could have typed that! But I think writing it by hand emphasizes like “no, this is something I really love, I love it so much I wrote it out by hand and made a picture to show you!”

Sometimes I want to paste and discuss some output you might see on a computer. For example, when I made my strace zine I realized that a lot of strace output is really confusing. I wanted to paste some actual strace output to talk about!

Luckily that is really easy to do in a drawing, because you can just put anything you want in it! 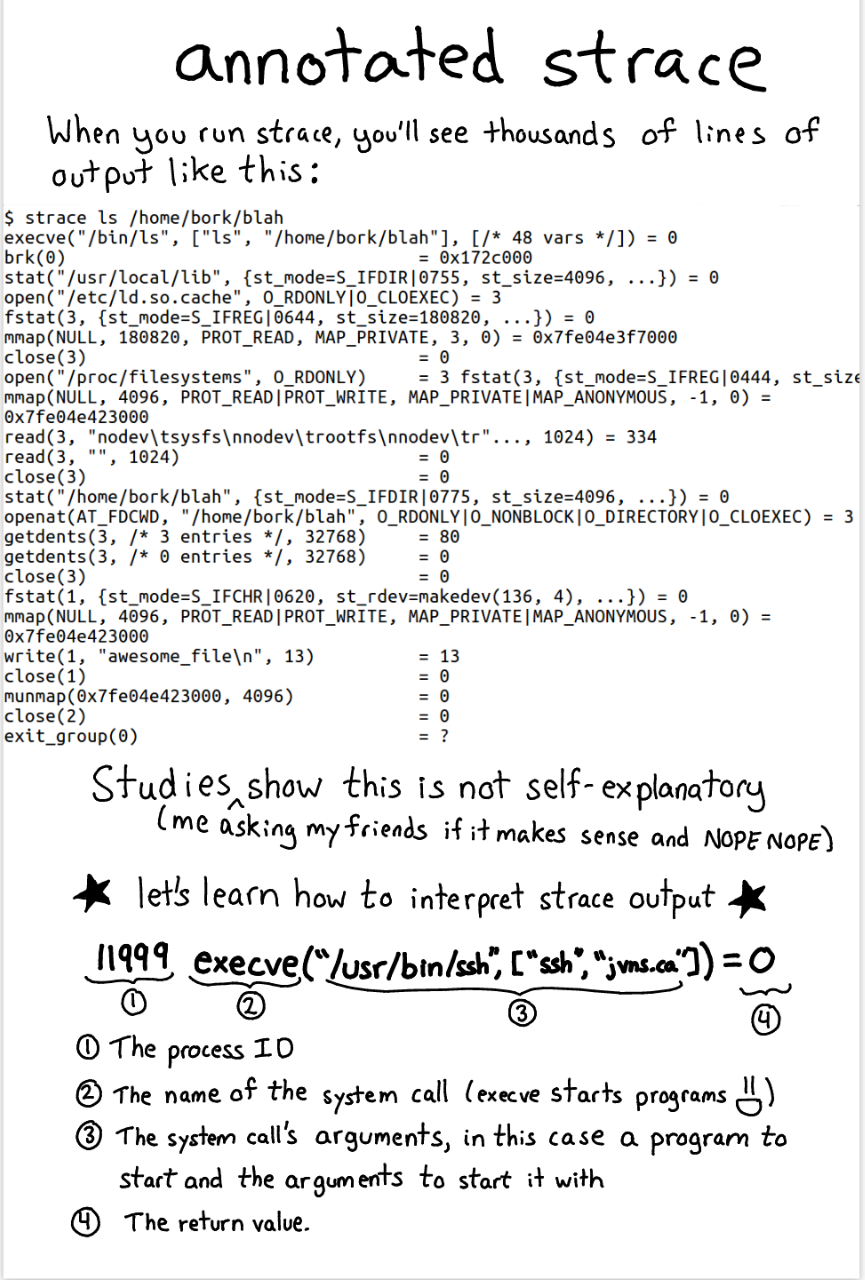 At the beginning I said “I can’t draw well”, which is true! But I can trace things. It’s a fun way to make up for my lack of drawing skills.

It’s useful sometimes to include logos / icons! For example here are versions I traced of the Kubernetes logo, the Recurse Center logo, Tux (the linux penguin), and a cat. The cat isn’t anybody’s logo as far as I know.

The hand-traced versions of these logos are kind of wobbly and imprecise in a way that is pretty satisfying to me, I think they look cool.

You have a blank sheet of paper in front you, and some information you want to convey! How do you do it? Having a few structure patterns really helps. Here are some examples: 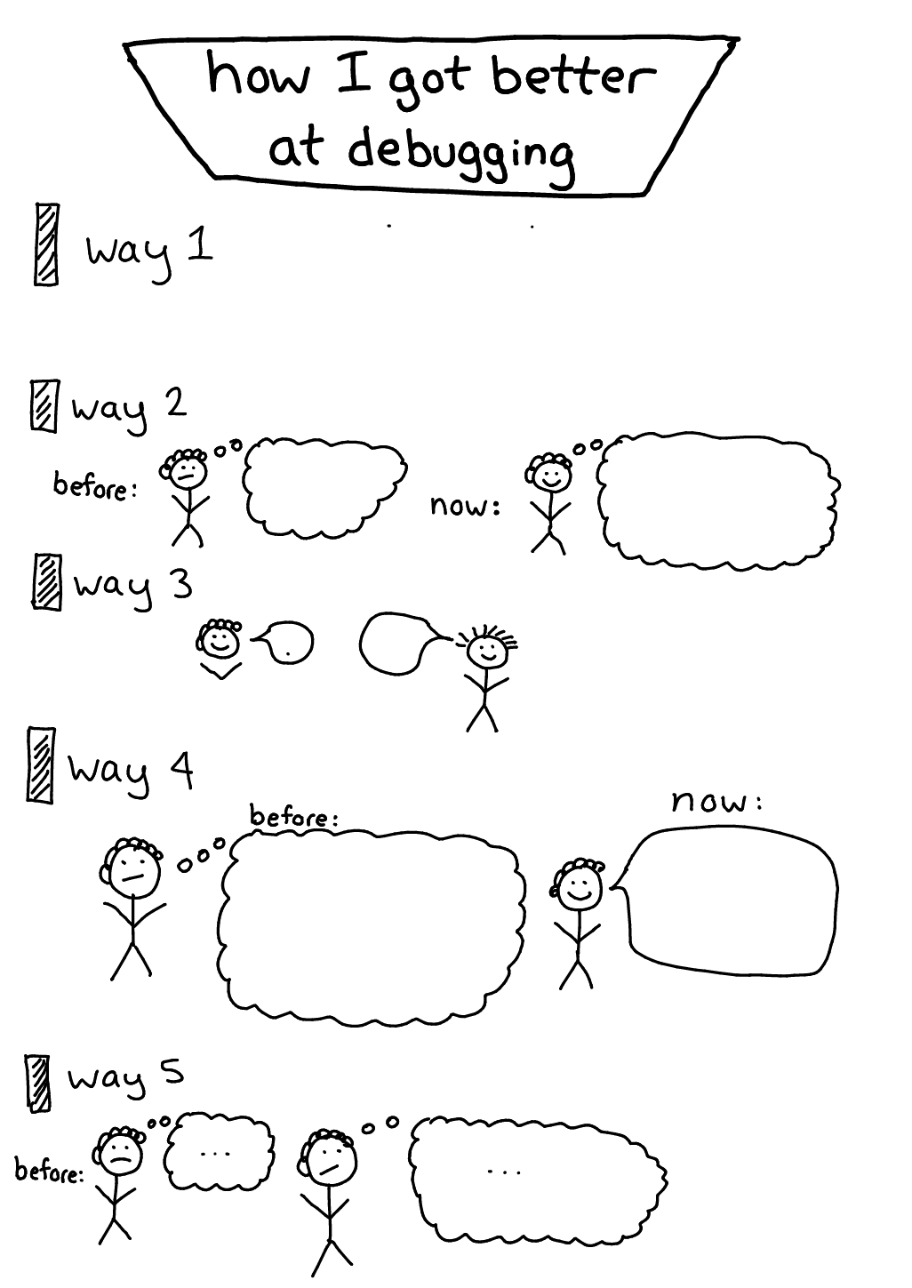 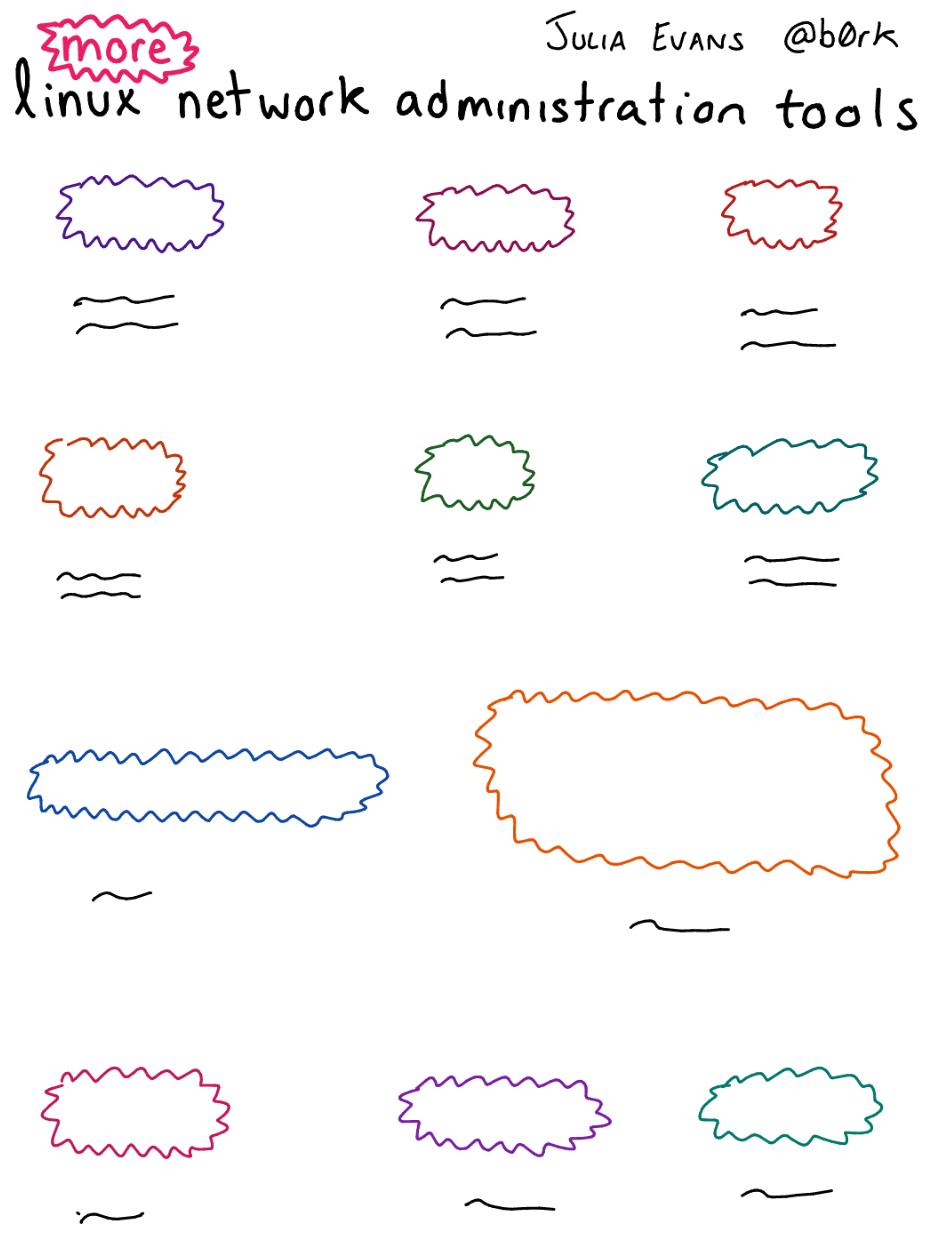 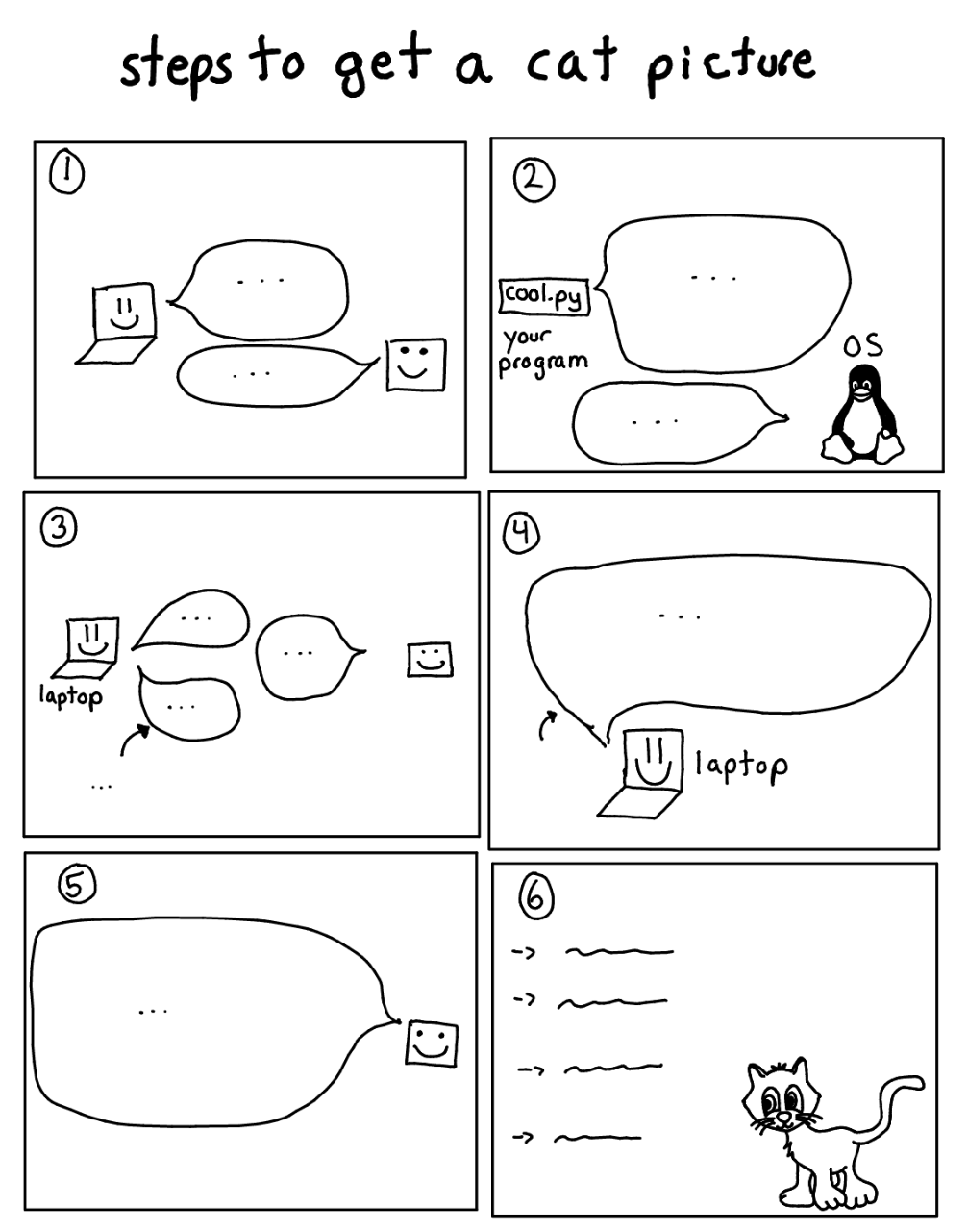 This one is more of a normal comic and less of a list – it’s visually laid out with squares/rectangles like a comic, and tells a bit of a story. 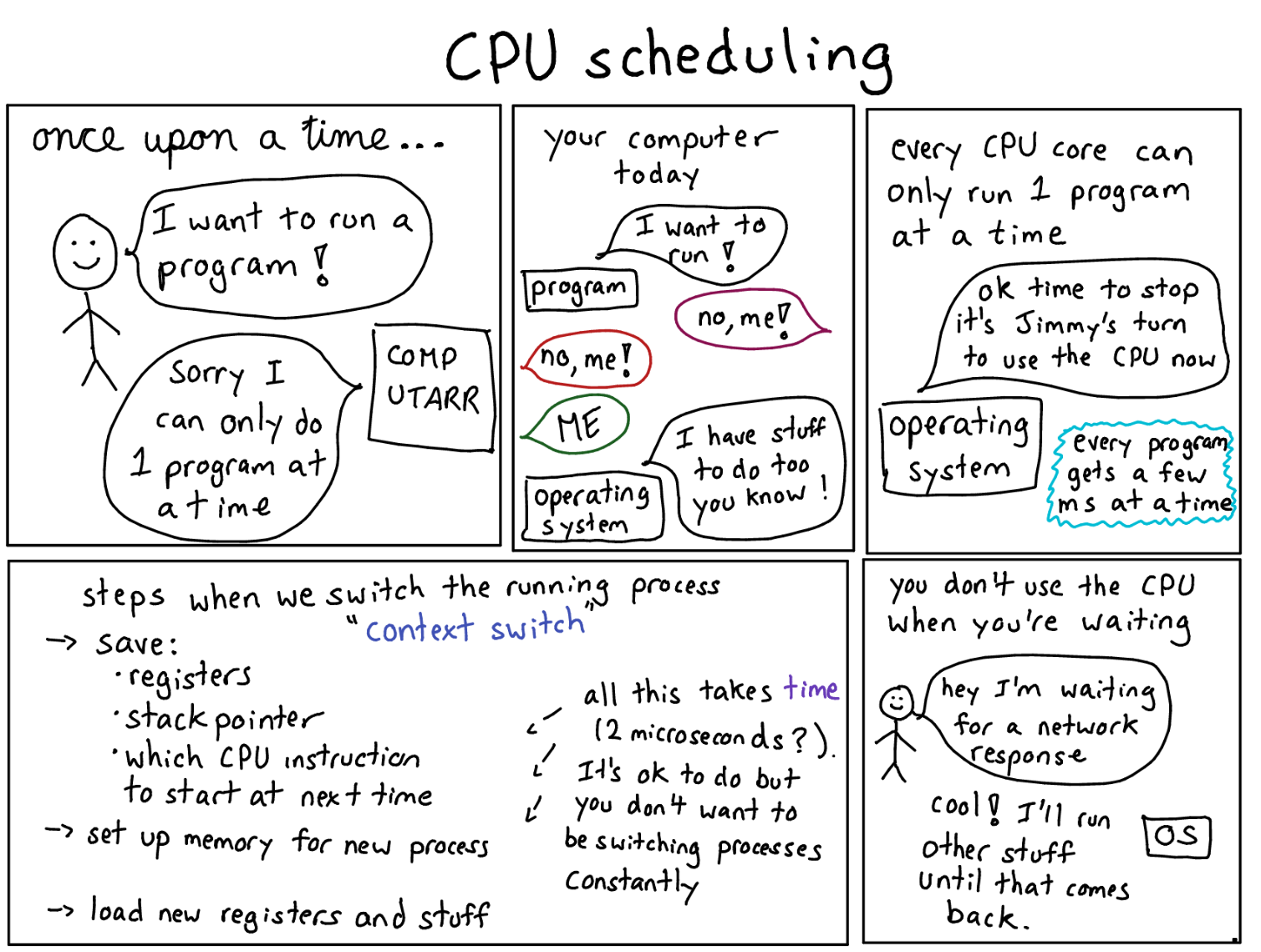 And finally this one is pretty unstructured. Personally I find this one a bit hard to to read/follow, I think having more structure than this is easier. 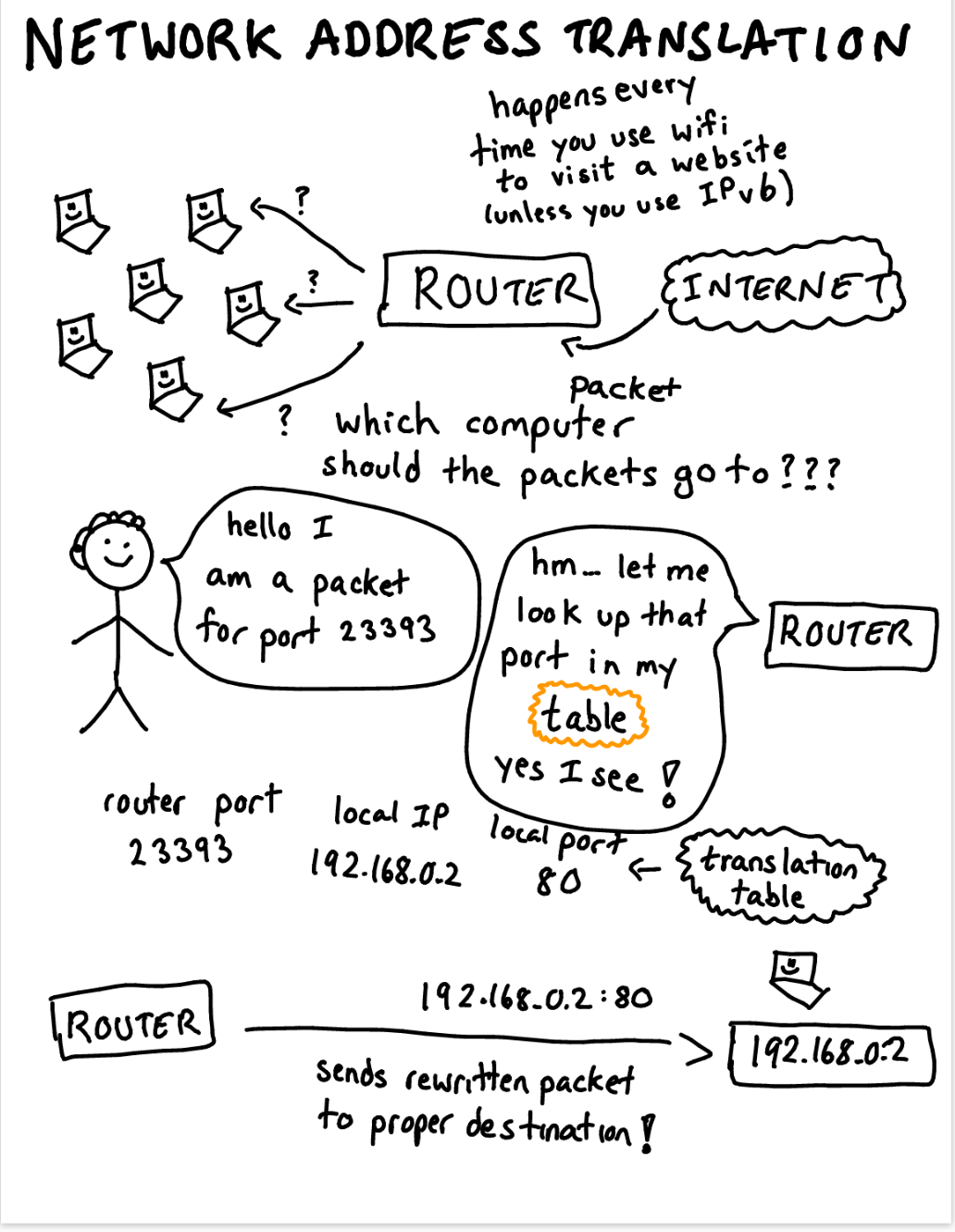 I think panels are a popular way of structuring comics for a reason, they help split up your drawing and make it clear what order the comic should be read in.

I’m going to pick on another cartoon a bit here which I don’t really like to do but I need an example :).

I think there are kind of 2 ways to use drawings to teach:

But when I’m working on illustrations I find it useful to think about whether my drawings are actually helping explain the concept or whether they’re just fun (like drawing a picture of a shark when talking about Wireshark!).

In this children’s illustrated guide to kubernetes, I think the drawings mostly serve to make the content seem more fun – almost all the actual content is in the text. I think if you removed all the giraffe drawings the document would contain basically the same information! This is not a bad thing necessarily but I usually like to have more informational content in my drawings.

tools that make it easy

Having a tablet I can draw on means I can really quickly draw something, click “share on Twitter” and immediately show it to the world. I definitely produce way more drawings with it than I did when I was working with pen and paper. And they look way better :)

drawings don’t have to be beautiful to be awesome

I started out by drawing things on paper with a pen / Sharpie and just taking pictures. They all looked way less good than everything I’ve posted above, but they were still really cool!!

For example here’s a very early drawing that I drew in pen on paper and posted to Twitter. Today I find this kind of janky & illegible but honestly when I posted it I got TONS of positive comments (evidence). 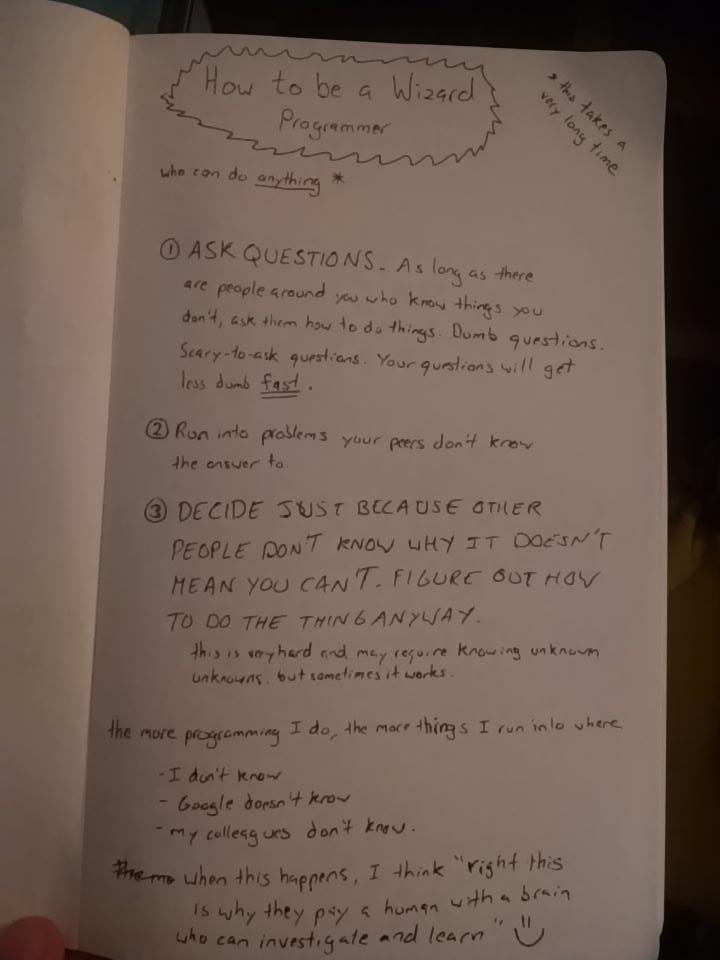 So drawings do not have to be beautiful and clean! They can be a sketchy thing you wrote on paper and that is okay.

how do you decide what’s a good subject for a tech cartoon?

Let’s take this comic on floating point I made last year! For that one, the steps were: 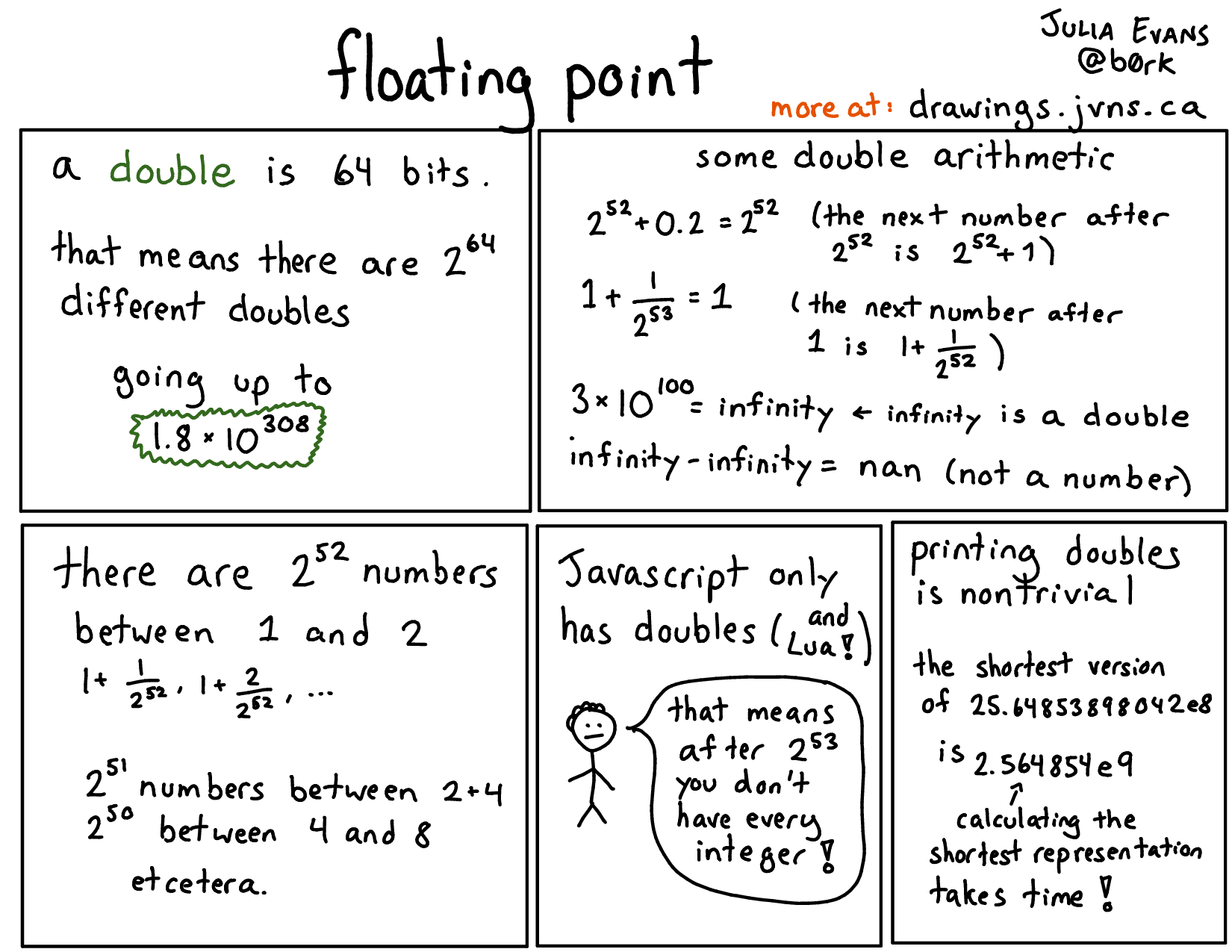 I organize a lot of my comics about some key insight / fact / surprising thing that it took me a long time to learn and was really useful to me.

you could make tech illustrations too

If you are interested in drawing tech cartoons, I hope this blog post gives you some ideas about how to do that! I’ve seen a lot of people making great illustrations about tech:

If you’re interested in making cartoons I’d really recommend the book Understanding Comics, by Scott McCloud, it’s a really incredible explanation of how comics work. I learned a ton from reading it.

A few other people who are doing great work in tech comics: