I’ve heard a million times about the dangers of floating point arithmetic, like:

But I find all of this a little abstract on its own, and I really wanted some specific examples of floating point bugs in real-world programs.

So I asked on Mastodon for examples of how floating point has gone wrong for them in real programs, and as always folks delivered! Here are a bunch of examples. I’ve also written some example programs for some of them to see exactly what happens. Here’s a table of contents:

None of these 8 examples talk about NaNs or +0/-0 or infinity values or subnormals, but it’s not because those things don’t cause problems – it’s just that I got tired of writing at some point :).

Also I’ve probably made some mistakes in this post.

how does floating point work?

I’m not going to write a long explanation of how floating point works in this post, but here’s a comic I wrote a few years ago that talks about the basics: 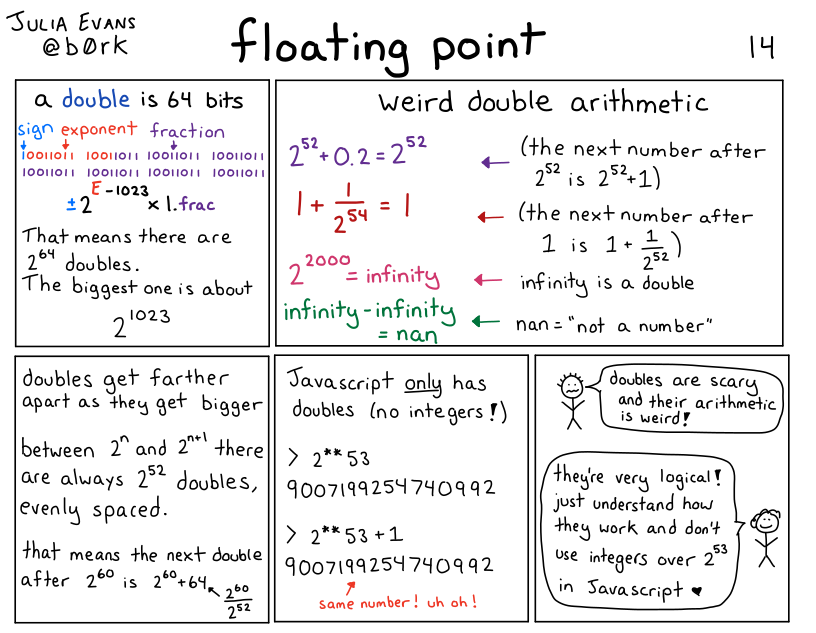 My goal for this post is just to explain what kind of problems can come up with floating point numbers and why they happen so that you know when to be careful with them, and when they’re not appropriate.

Now let’s get into the examples.

example 1: the odometer that stopped

One person said that they were working on an odometer that was continuously adding small amounts to a 32-bit float to measure distance travelled, and things went very wrong.

To make this concrete, let’s say that we’re adding numbers to the odometer 1cm at a time. What does it look like after 10,000 kilometers?

Here’s a C program that simulates that:

and here’s the output:

what went wrong: gaps between floating point numbers get big

I got those numbers by going to https://float.exposed/0x48800000 and incrementing the ‘significand’ number a couple of times.

one way to solve this: use a double

Using a 64-bit float fixes this – if we replace float with double in the above C program, everything works a lot better. Here’s the output:

There are still some small inaccuracies here – we’re off about 17 centimeters. Whether this matters or not depends on the context: being slightly off could very well be disastrous if we were doing a precision space maneuver or something, but it’s probably fine for an odometer.

Another way to improve this would be to increment the odometer in bigger chunks – instead of adding 1cm at a time, maybe we could update it less frequently, like every 50cm.

If we use a double and increment by 50cm instead of 1cm, we get the exact correct answer:

A third way to solve this could be to use an integer: maybe we decide that the smallest unit we care about is 0.1mm, and then measure everything as integer multiples of 0.1mm. I have never built an odometer so I can’t say what the best approach is.

But tweet IDs are big numbers, bigger than 2^53. The Twitter API now returns them as both integers and strings, so that in Javascript you can just use the string ID (like “1612850010110005250”), but if you tried to use the integer version in JS, things would go very wrong.

You can check this yourself by taking a tweet ID and putting it in the Javascript console, like this:

This particular issue doesn’t happen in Python (or any other language that I know of), because Python has integers. Here’s what happens if we enter the same number in a Python REPL:

This is a small variant of the “tweet IDs in Javascript” issue, but even if you’re not actually writing Javascript code, numbers in JSON are still sometimes treated as if they’re floats. This mostly makes sense to me because JSON has “Javascript” in the name, so it seems reasonable to decode the values the way Javascript would.

Several people mentioned issues with sending floats in JSON, whether either they were trying to send a large integer (like a pointer address) in JSON and it got corrupted, or sending smaller floating point values back and forth repeatedly and the value slowly diverging over time.

Let’s say you’re doing some statistics, and you want to calculate the variance of many numbers. Maybe more numbers than you can easily fit in memory, so you want to do it in a single pass.

There’s a simple (but bad!!!) algorithm you can use to calculate the variance in a single pass, from this blog post. Here’s some Python code:

First, let’s use this bad algorithm to calculate the variance of 5 small numbers. Everything looks pretty good:

This is extremely bad: not only is the bad variance way off, it’s NEGATIVE! (the variance is never supposed to be negative, it’s always zero or more)

What’s going here is similar to our odometer number problem: the sum_of_squares number gets extremely big (about 10^21 or 2^69), and at that point, the gap between consecutive floating point numbers is also very big – it’s 2**46. So we just lose all precision in our calculations.

The term for this problem is “catastrophic cancellation” – we’re subtracting two very large floating point numbers which are both going to be pretty far from the correct value of the calculation, so the result of the subtraction is also going to be wrong.

The blog post I mentioned before talks about the a better algorithm people use to compute variance called Welford’s algorithm, which doesn’t have the catastrophic cancellation issue.

And of course, the solution for most people is to just use a scientific computing library like Numpy to calculate variance instead of trying to do it yourself :)

A bunch of people mentioned that different platforms will do the same calculation in different ways. One way this shows up in practice is – maybe you have some frontend code and some backend code that do the exact same floating point calculation. But it’s done slightly differently in Javascript and in PHP, so you users end up seeing discrepencies and getting confused.

In principle you might think that different implementations should work the same way because of the IEEE 754 standard for floating point, but here are a couple of caveats that were mentioned:

I’m not very sure about these points and I don’t have concrete examples I can reproduce.

Kerbal Space Program is a space simulation game, and it used to have a bug called the Deep Space Kraken where when you moved very fast, your ship would start getting destroyed due to floating point issues. This is similar to the other problems we’ve talked out involving big floating numbers (like the variance problem), but I wanted to mention it because:

Another example of this is the Far Lands in Minecraft.

I promise this is the last example of “very large floating numbers can ruin your day”. But! Just one more! Let’s imagine that we try to represent the current Unix epoch in nanoseconds (about 1673580409000000000) as a 64-bit floating point number.

So this would be a great way to end up with inaccuracies in your time math. Of course, time libraries actually represent times as integers, so this isn’t usually a problem. (there’s always still the year 2038 problem, but that’s not related to floats)

In general, the lesson here is that sometimes it’s better to use integers.

example 7: splitting a page into columns

Let’s say you have a page width, and a column width, and you want to figure out:

You might reasonably try floor(page_width / column_width) for the first question and page_width % column_width for the second question. Because that would work just fine with integers!

This is wrong! The amount of space left is 0!

I think the lesson here is to never calculate the same thing in 2 different ways with floats.

This is a very basic example but I can kind of see how this would create all kinds of problems if I was doing page layout with floating point numbers, or doing CAD drawings.

Here’s a very silly Python program, that starts a variable at 1000 and decrements it until it collides with 0. You can imagine that this is part of a pong game or something, adn that a is a ball that’s supposed to collide with a wall.

The lesson here is that instead of checking for float equality, usually you want to check if two numbers are different by some very small amount. Or here we could just write while a > 0.

I might write another followup post later – that Mastodon thread has literally 15,000 words of floating point problems in it, there’s a lot of material! Or I might not, who knows :)