Hello! I like looking at other independent authors’ business graphs, so I thought I’d share some percentages and graphs of my own this year. Hopefully some of this is useful to other writers who run internet businesses.

All of the graphs are about Wizard Zines’ business selling zines – I don’t do sponsorships or consulting or commissions or anything.

This year 58% of sales were digital and 42% were print. I’m really happy with this: when I decided to start printing and shipping zines in 2021, I was a bit worried that nobody would buy them. But we’ve sold out our first two print runs and it’s been going great.

Note: PDF means “PDF you can read on your computer or print at home”, print means “print version that’s physically shipped to you”

I sell both corporate licenses (“buy this zine for your team!”) and personal copies. I think having corporate sales is great, but it feels like it would be risky to be too dependent on a small number of corporate customers. So I keep an eye on the percentage of corporate sales.

We’re at about 16% corporate sales for 2022 (as a percentage of revenue), which doesn’t seem too high. It looks like this number has been pretty flat over time.

I run a PPP (“purchasing power parity”) program where I give a discount to folks from countries with a weaker currency relative to the US. We’ll look at a couple of things here:

Here are some graphs:

About 5% of revenue comes from sales with PPP discounts.

It used to be that you could only buy individual zines on the store – if you wanted to buy a bundle, you had to buy each one individually. But then one day someone suggested I add a way to buy all of the zines at once.

I did, and this turned out to be a very important business decision – here’s a graph of the percentage of revenue from zine bundles (“packs”) over time:

Some reasons I switched to Shopify:

Moving from Gumroad to Shopify took probably a month of energy in 2022 but it was worth it to have everything in one place.

Here’s a graph of (relative) revenue. The blue and the purple are Shopify / Gumroad percentages, because of the Gumroad -> Shopify migration I mentioned in 2021 and 2022. 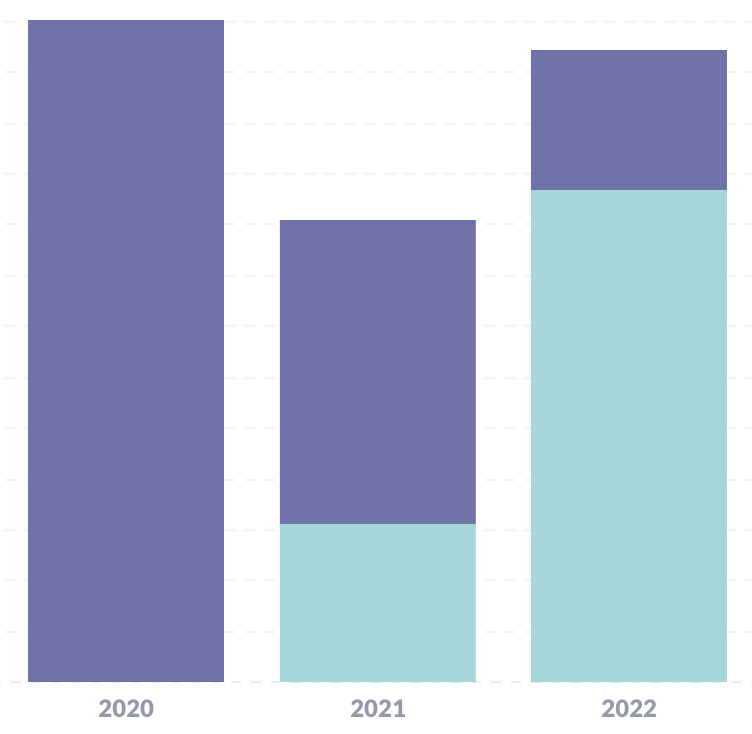 This is related to the number of zines released each year:

I put this towards the end because this is not something I try not to worry about too much – every year so far the business has made comfortably enough to pay everyone. If that looks like it might change, I’ll worry about it.

You can see two giant spikes: in April and December when we released new zines. (The Pocket Guide to Debugging has done super well so far, thanks to all of you who bought it! Print copies are on track to ship around the end of January.).

You can also see the Shopify / Gumroad migration happening in this graph – in May I stopped using Gumroad completely.

I got curious about which countries most sales come from, so I drew a graph. I combined the EU into one big group because there are a lot of European countries and I do a lot of special case stuff for Europe (for tax issues etc). Here’s the graph:

If we look at copies by country instead of revenue, this looks a bit different – India and Brazil are both above Australia.

Here’s a more detailed list of revenue percentages per country, if you want to break that “Europe” category above down more.

It’s fun to see so many countries on the list!

how were the graphs generated?

One person asked how these graphs were generated. Basically I have:

This setup has worked great, I really like Metabase. All of the graphs are screenshots from Metabase.

Finally, I want to thank everyone who worked with me on the zines this year. I couldn’t do it without them. We had:

Also my partner Kamal reads every zine before it’s published and he always gives me great advice.

And of course I couldn’t do any of this without the readers who support all of this work ❤.