Hello! On Wednesday I was talking to a friend about how it would be cool to have an nginx playground website where you can just paste in an nginx config and test it out. And then I realized it might actually be pretty easy to build, so got excited and started coding and I built it. It’s at https://nginx-playground.wizardzines.com. 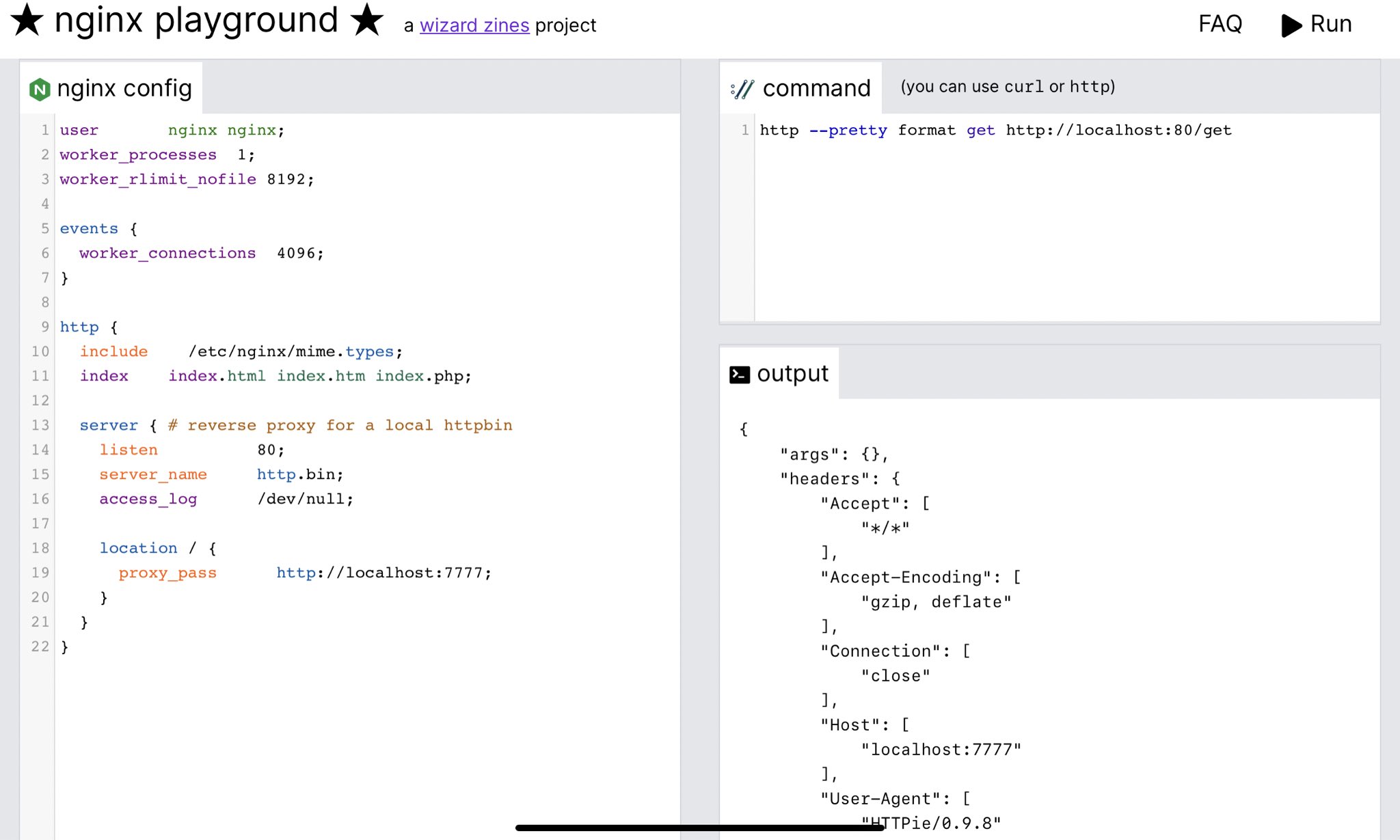 For the rest of the post I’m mostly going to talk about how I built the project, because there were a few decisions that weren’t obvious to me.

how to use it

And then you click “Run” in the top right, and it’ll output either:

I find that playgrounds really help me learn – it’s incredibly useful to be able to quickly and safely experiment and try out different options without worrying that Something Terrible is going to happen if you make a mistake.

And nginx in particular is EXTREMELY finicky to configure, so I think it’s extra important to have a playground for nginx to quickly test things out.

Here are 3 playgrounds I’ve made in the past:

and a few other great playgrounds that others have made:

building it quickly by keeping it simple

This made pretty easy to build the project quickly (I just needed to write 1 backend endpoint and then a frontend that uses that endpoint!). This is also how the dns lookup tool I made works – I like this approach a lot and I think I’ll do other projects in the same way.

Let’s talk about what that backend code does when the frontend makes a request to it!

what happens when you make a request

Here’s what the Go backend does when you click ‘run’: (also here’s a gist with the code right now)

The whole point of the tool is to let people run arbitrary nginx configurations, and it’s easy to imagine how that could result in the server being compromised. But I wanted run the service for free and not spend a lot of money on hosting. So I wanted to just use 1 shared server for all requests.

This kind of thing often stops me from doing projects like this, but this one felt a little more tractable to me.

Here’s how I decided to approach the security to start, after talking to a friend about it:

I think that with these constraints, the only bad things that could happen are:

a. Someone gets access to the test nginx configs of other people using the website at the same time b. Someone replaces the backend API server so that it returns some sort of malicious or offensive output. c. Someone tries to mine bitcoin on the tiny instance it’s running on (1 shared CPU, 256 MB RAM)

I don’t think any of those are thaaaat harmful in the grand scheme of things, though it’s possible I’m missing something. Someone already showed how to read the /etc/passwd file which is fun, but there’s nothing sensitive in there.

I might switch to running each nginx in a container later instead of just running it in a network namespace, but I didn’t do it initially because I thought it might be too slow – it’s already a bit slow.

some notes on performance

Like I mentioned before, this backend is running on a pretty small instance (1 shared CPU, 256 MB RAM). Here are some quick notes on that:

In particular JSFiddle does a nice simple thing where it calculates the height of the main area as calc(100vh - 60px) and the header has height 60px. I wouldn’t have thought of that on my own but it seems to work really well.

I used CodeMirror for syntax highlighting because that’s what jsfiddle and codepen both seem to do, it was super easy to set up, and it turns out it even has an nginx and a shell mode! It’s everything I could have dreamed of :)

The main hiccup with CodeMirror was that I initially wanted to use a vue-codemirror integration and there wasn’t one for Vue 3, but I decided that it was unnecessary and just wrote my own tiny integration that updates Vue when the textbox is updated. (basically just this.nginx_codemirror.on('change', cm => this.nginx_config = cm.getValue()))

You can see the Javascript code at script.js but there’s really not a lot of it.

I’m still not quite sure what the examples should be, but I think I want to provide a few more template nginx configs to use as starting points.

this was easier to build than I thought

This was a lot easier to build than I thought it would be! It makes me want to build playgrounds for other programs too, though I’m not sure which one would be next. HAProxy seems like an obvious similar choice.