TCP/IP is the set of networking protocols that we use on the modern internet – TCP, UDP, IP, ARP, ICMP, DNS, etc. When I talk about “networking”, I’m basically always talking about TCP/IP.

So if you’re just starting to learn about networking and you’re confused about the OSI model, here’s an explanation of how it corresponds to TCP/IP, how it doesn’t, and why it’s safe to mostly just ignore it if you don’t find it helpful.

the OSI model has 7 layers

Let’s very briefly discuss what the OSI model is: it’s an abstract model for how networking works with 7 numbered layers:

I won’t say more about what each of those is supposed to mean, there are a thousand explanations of it online.

how the OSI model corresponds to TCP/IP

Some parts of the OSI model do correspond to TCP/IP. Basically for any TCP or UDP packet you can split up the packet into different sections and give each section a layer number.

Here’s a diagram from my Networking! ACK! zine showing how you can assign layers to different parts of a packet.

I just noticed that for some reason this is a UDP packet containing the start of a HTTP request which is unrealistic, but let’s go with it, you could make a UDP packet like that if you wanted :). I think I did that to save space. 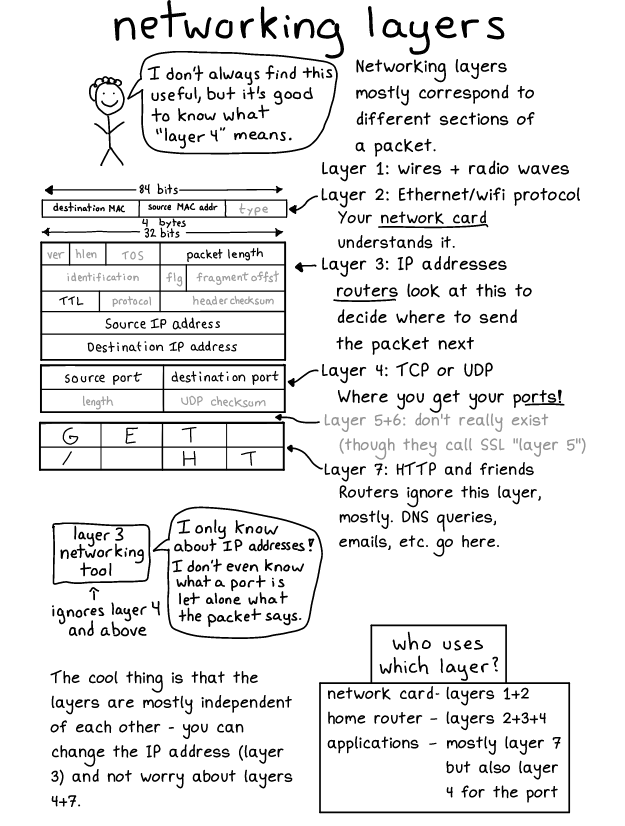 Now that we’ve talked about how the OSI model does correspond to TCP/IP, let’s talk about how it doesn’t!

So even thought I don’t really use those terms myself when talking about networking, I need to understand them to be able to read documentation and understand what people are saying.

I’ve heard a few different interpretations of what layers 5 or 6 could mean in TCP/IP, including:

But layers 5 and 6 definitely don’t have a clear correspondence like “every layer has a corresponding header in the TCP packet” the way layers 2, 3, and 4 do.

And I’ve never seen anyone actually refer to layer 5 or 6 in practice when talking about TCP/IP, even though people talk about layers 2, 3, 4, and 7 all the time.

what layer is an ARP packet?

Also, some parts of TCP/IP don’t fit well into the OSI model even around layers 2-4 – for example, what layer is an ARP packet?

the OSI model is a literal description of some obsolete protocols

So, if the OSI model doesn’t literally describe TCP/IP, where did it come from?

Some very brief research on Wikipedia says that in addition to an abstract description of 7 layers, the OSI model also contained a bunch of specific protocols implementing those layers. Apparently this happened during the Protocol Wars in the 70s and 80s, where the OSI model lost and TCP/IP won.

This explains why the OSI model doesn’t really correspond that well to TCP/IP, since if the OSI protocols had “won” then the OSI model would correspond exactly to how internet networking actually works.

Hopefully this will help clear things up for somebody! I wish someone had told me when I started learning networking that I could just learn approximately how layers 2, 3, 4, and 7 of the OSI model relate to TCP/IP and then ignore everything else about it.