Hello! I’ve been working on a zine about debugging for the last 6 months with my friend Marie, and one of the problems we ran into was figuring out how to explain the right attitude to take when debugging.

We ended up writing a short debugging manifesto to start the zine with, and I’m pretty happy with how it came out. Here it is as an image, and as text (with some extra explanations) 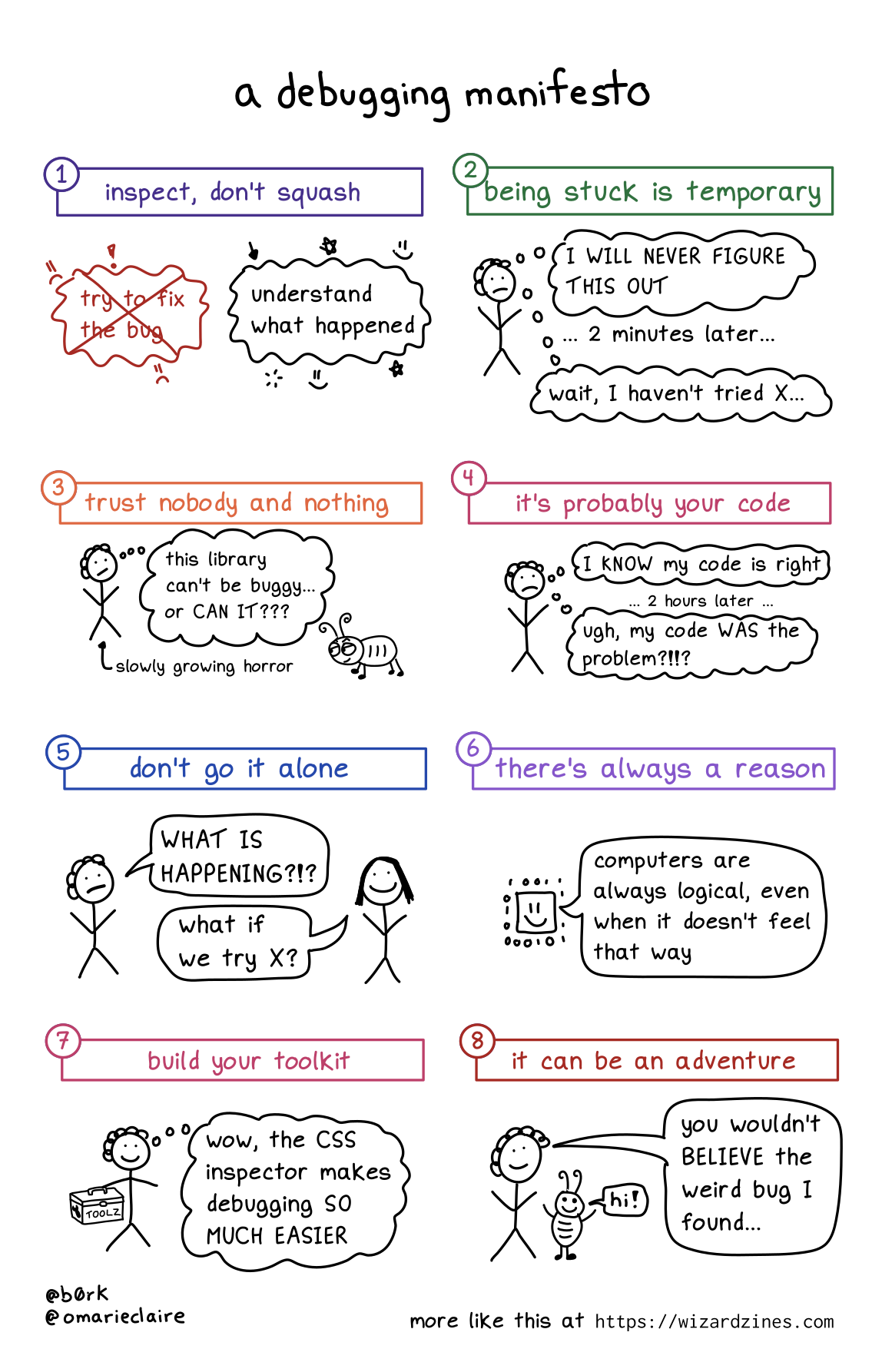 When you run into a bug, the natural instinct is to try to fix it as fast as possible. And of course, sometimes that’s what you have to do – if the bug is causing a huge production incident, you have to mitigate it quickly before diving into figuring out the root cause.

But in my day to day debugging, I find that it’s generally more effective (and faster!) to leave the bug in place, figure out exactly what’s gone wrong, and then fix it after I’ve understood what happened.

Trying to fix it or add workarounds without fully understanding what happened usually ends up just leaving me more confused.

2. Being stuck is temporary

Sometimes I get really demoralized when debugging and it feels like I’ll NEVER make progress.

I have to remind myself that I’ve fixed a lot of bugs before, and I’ll probably fix this one too :)

3. Trust nobody and nothing

Sometimes bugs come from surprising sources! For example, in I think I found a Mac kernel bug? I describe how, the first time I tried to write a program for Mac OS, I had a bug in my program that was caused by a Mac OS kernel bug.

This was really surprising (usually the operating system is not at fault!!), but sometimes even normally-trustworthy sources are wrong. Even it’s a popular library, your operating system, the official documentation, or an extremely smart and competent coworker!

That said, almost all of the time the problem is not “there’s a bug in Mac OS”. I can only speak for myself, but 95% of the time something is going wrong with my program, it’s because I did something silly.

So it’s important to look for the problem in your own code first before trying to blame some external source.

I’ve learned SO much by asking coworkers or friends for help with debugging. I think it’s one of the most fun ways to collaborate because you have a specific goal, and there are tons of opportunities to share information like:

This one kind of speaks for itself: sometimes it feels like things are just randomly breaking for no reason, but that’s never true.

Even if something truly weird is happening (like a hardware problem), that’s still a reason.

I’ve written a LOT about my love for debugging tools like tcpdump, strace, and more on this blog.

To fix bugs you need information about what your program is doing, and to get that information sometimes you need to learn a new tool.

Also, sometimes you need to build your own better tools, like by improving your test suite, pretty printing, etc.

8. It can be an adventure

As you probably know if you’re a regular reader of this blog, I love debugging and I’ve learned a lot from doing it. You get to learn something new! Sometimes you get a great war story to tell! What could be more fun?

I really think of debugging as an investment in my future knowledge – if something is breaking, it’s often because there’s something wrong in my mental model, and that’s an opportunity to learn and make sure that I know it for next time.

Of course, not all bugs are adventures (that off-by-one error I was debugging today certainly did not feel like a fun adventure). But I think it’s important to (as much as you can) reflect on your bugs and see what you can learn from them.