Hello! I spent this whole past week figuring out how to use Firecracker and I really like it so far.

Initially when I read about Firecracker being released, I thought it was just a tool for cloud providers to use – I knew that AWS Fargate and https://fly.io used it, but I didn’t think that it was something that I could directly use myself.

But it turns out that Firecracker is relatively straightforward to use (or at least as straightforward as anything else that’s for running VMs), the documentation and examples are pretty clear, you definitely don’t need to be a cloud provider to use it, and as advertised, it starts VMs really fast!

So I wanted to write about using Firecracker from a more DIY “I just want to run some VMs” perspective.

I’ll start out by talking about what I’m using it for, and then I’ll explain a few things I learned about it along the way.

my goal: a game where every player gets their own virtual machine

I’m working on a sort of game to help people learn command line tools by giving them a problem to solve and a virtual machine to solve it in, a little like a CTF. It still basically exists only on my computer, but I’ve been working on it for a while.

Here’s a screenshot of one of the puzzles I’m working on right now. This one is about setting file extended attributes with setfacl. 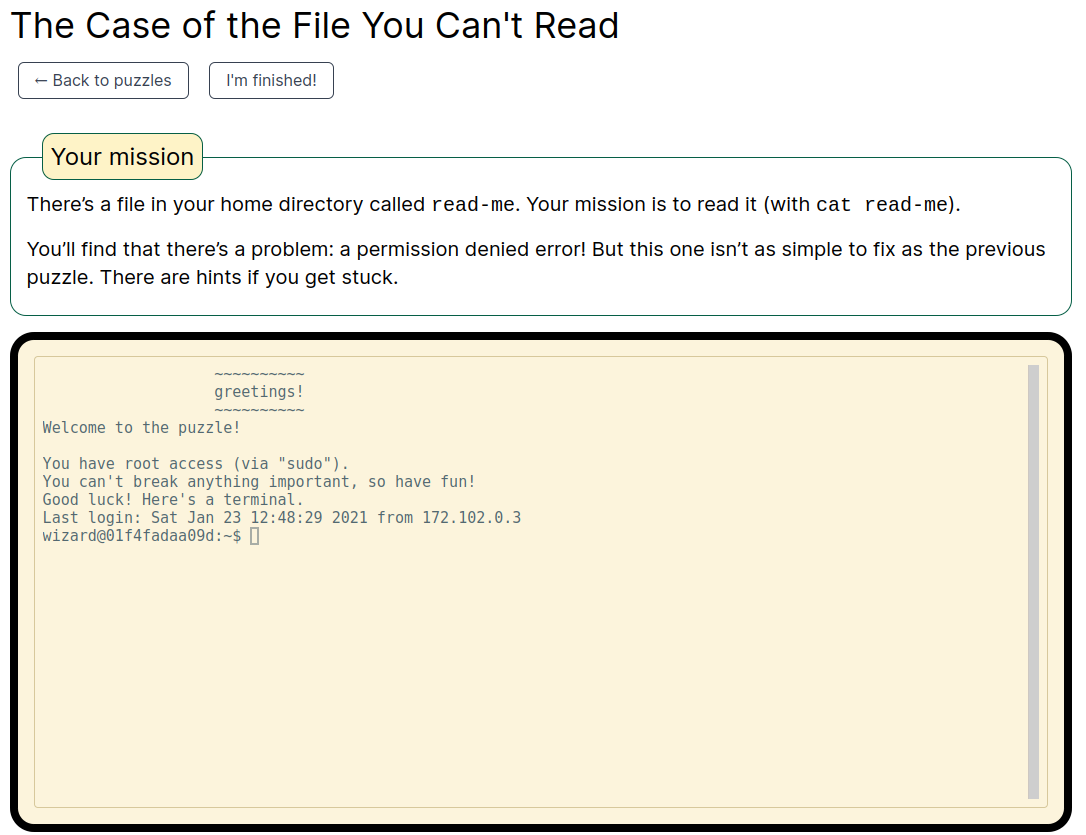 why not use containers?

I wanted to use virtual machines and not containers for this project basically because I wanted to mimic a real production machine that the user has root access to – I wanted folks to be able to set sysctls, use nsenter, make iptables rules, configure networking with ip, run perf, basically literally anything.

the problem: starting a virtual machine is slow

I wanted people to be able to click “Start” on a puzzle and instantly launch a virtual machine. Originally I was launching a DigitalOcean VM every time, but they took about a minute to boot, I was getting really impatient waiting for them every time, and I didn’t think it was an acceptable user experience for people to have to wait a minute.

I also tried using qemu, but for reasons I don’t totally understand, starting a VM with qemu was also kind of slow – it seemed to take at least maybe 20 seconds.

Firecracker can start a VM in less than a second!

Firecracker says this about performance in their specification:

It takes <= 125 ms to go from receiving the Firecracker InstanceStart API call to the start of the Linux guest user-space /sbin/init process.

So far I’ve been using Firecracker to start relatively large VMs – Ubuntu VMs running systemd as an init system – and it takes maybe 2-3 seconds for them to boot. I haven’t been measuring that closely because honestly 5 seconds is fast enough and I don’t mind too much about an extra 200ms either way.

But enough background, let’s talk about how to actually use Firecracker.

here’s a “hello world” script to start a Firecracker VM

I said at the beginning of this post that Firecracker is pretty straightforward to get started with. Here’s how.

Firecracker’s getting started instructions are really good (they just work!) but it was separated into a bunch of steps and I wanted to see everything you have to do together in 1 shell script. So I wrote a short shell script you can use to start a Firecracker VM, and some quick instructions for how to use it.

Running a script like this was the first thing I did when trying to wrap my head around Firecracker. There’s basically 3 steps:

step 1: Download Firecracker from their releases page and put it somewhere

step 2: Run this script as root (you might have to edit the last line with the path to the firecracker binary if it’s not in root’s PATH)

I also put this script in a gist: firecracker-hello-world.sh. The IP addresses here are chosen pretty arbitrarily. Most the script is just writing a JSON file.

step 3: You have a VM running!

You can also SSH into the VM like this, with the SSH key that the script downloaded:

The networking commands and the rootfs image in this script are from the firecracker-demo repository which I found really helpful.

how I put a Firecracker VM on the Docker bridge

I had a couple of problems with this “hello world” setup though:

I struggled with trying to understand what a Linux bridge was and how it worked for about a day before figuring out how to get this to work. Here’s a slight modification of the previous script firecracker-hello-world-docker-bridge.sh which runs a Firecracker VM on the Docker bridge

You can run it as root and SSH to the resulting VM like this (the IP is different because it has to be in the Docker subnet).

My guess is that most people probably won’t want to use the Docker bridge, if you just want the VM to be able to connect to the outside internet I think the best way is to create a new bridge.

In my application I’m actually using a bridge called firecracker0 which is a docker-compose network I made. It feels a little sketchy to be using a bridge managed by Docker in this way but for now it works so I’ll keep doing that unless I find a better way.

how I built my own Firecracker images

This “hello world” example is all very well and good, but you might say – ok, how do I build my own images?

Basically you have to do 2 things:

Here’s how I put together my filesystem. Initially I tried downloading Ubuntu’s focal cloud image and extracting the root partition with dd, but I couldn’t get it work.

Instead, I did what the Firecracker docs suggested and I built a Docker container and copied the contents of the container into a filesystem image.

Here’s what the Dockerfile I used looked like approximately: (I haven’t tested this exact Dockerfile but I think it should work). The main things are that you have to install some kind of init system because the default ubuntu:20.04 image doesn’t come with one because you don’t need one in a container. I also ran unminimize to restore some man pages because the container is for interactive use.

And here’s the basic shell script I’ve been using to create a filesystem image from the Docker container. I ran the whole thing as root, but technically you only have to run mount as root.

I’m still not quite sure how much I’m going to like this approach of using Docker containers to create VM images – it feels a bit weird to me but it’s been working fine so far.

I think most people who use Firecracker use a more lightweight init system than systemd and it’s definitely not necessary to use systemd but I think I’m going to stick with systemd for now because I want it to feel mostly like a normal production Linux system and a lot of the production servers I’ve used have used systemd.

Okay, that’s all I have to say about creating images. Let’s talk a bit more about configuring Firecracker.

Firecracker supports either a socket interface or a configuration file

You can start a Firecracker VM 2 ways:

how I wrote a HTTP service that starts Firecracker VMs: use the Go SDK!

I wanted to have a little HTTP service that I could call from my Ruby on Rails server to start new VMs and stop them when I was done with them.

Here’s what the interface looks like – you give it a root image and a kernel and it returns an ID an the VM’s IP address. All of the files paths are just local paths on my machine.

and then here’s what deleting a VM looks like (I might make this use the DELETE method later to make it more REST-y :) )

At first I wasn’t sure how I was going to use the Firecracker socket API to implement this interface, but then I discovered that there’s a Go SDK! This made it way easier to generate the correct JSON, because there were a bunch of structs and the compiler would tell me if I made a typo in a field name.

I basically wrote all of my code so far by copying and modifying code from firectl, a Go command line tool. The reason I wrote my own tool insted of just using firectl directly was that I wanted to have a HTTP API that could launch and stop lots of different VMs.

I found the firectl code and the Go SDK pretty easy to understand so I won’t say too much more about it here.

If you’re interested you can see a gist with my current HTTP service for managing Firecracker VMs which is a huge mess and pretty buggy and not intended for anyone but me to use. It does start VMs successfully though which is an important first step!!!

Another question I had was: “ok, where am I going to run these Firecracker VMs in production?“. The funny thing about running a VM in the cloud is that cloud instances are already VMs. Running a VM inside a VM is called “nested virtualization” and not all cloud providers support it – for example AWS doesn’t.

Right now I’m using DigitalOcean and I was delighted to see that DigitalOcean does support nested virtualization even on their smallest droplets – I tried running the “hello world” Firecracker script from above and it just worked!

I think GCP supports nested virtualization too but I haven’t tried it. The official Firecracker documentation suggests using a metal instance on AWS, probably because Firecracker is made by AWS.

I don’t know what the performance implications of using nested virtualization are yet but I guess I’ll find out!

Firecracker only runs on Linux

I should say that Firecracker uses KVM so it only runs on Linux. I don’t know if there’s a way to start VMs in a similarly fast way on a Mac, maybe there is? Or maybe there’s something special about KVM? I don’t understand how KVM works.

A few things I still haven’t figured out:

A few people gave me useful links answering some of the above questions.

about why qemu is slower than Firecracker (thanks @tptacek for these):

about how Firecracker works: