I’ve been working on clustering faces using an autoencoder, and I finally have some fun screenshots to share so here they are.

Our input data looks like this: (from the google quickdraw dataset)

Each face is represented as a sequence of vectors, one vector for every line in the face (kind of like an SVG path). Here’s an example:

The idea is to train the Encoder and Decoder networks so that Decoder(Encoder(x)) is as close to x as possible for every x in the training set. I used the mean squared error as a loss function to start.

The training didn’t go that well – I got the loss to go down a bit (from 0.3 to 0.25), but it definitely didn’t seem that well trained. I think it would have maybe done better if I trained it for longer but I got bored. 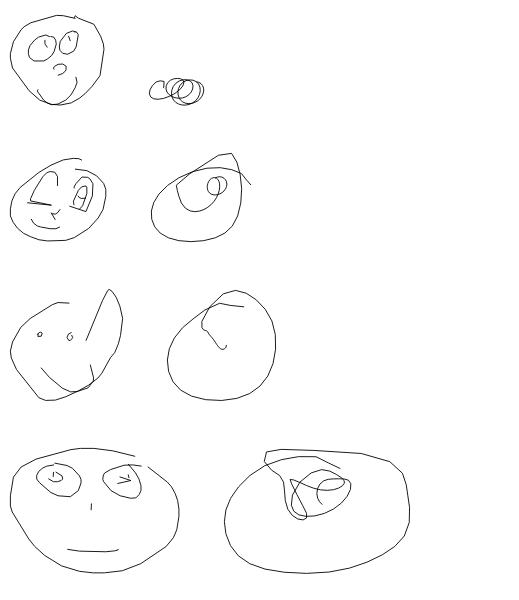 I’m actually pretty impressed by this – it seems to have figured how to draw a circle of about the right size for the face, and vaguely that it should draw something inside the circle. Way better than nothing!

My original goal was to cluster the faces by taking Encoder(x) for the inputs in the training set and clustering those vectors.

I used DBSCAN from scikit-learn more or less arbitrarily, basically because it seemed like it might work better for higher dimensional vectors (I had 50 dimensions)

next: see if I can get it to draw some eyes

My next goal I think is to see if I can improve the autoencoder network so that it can also draw the components inside the face better. We’ll see how it goes!