Hello! I spent the last couple of days experimenting with using back propagation through time with RNNs.

debugging “this isn’t training” is hard

Yesterday I was training a model,and the loss over time looked like this: 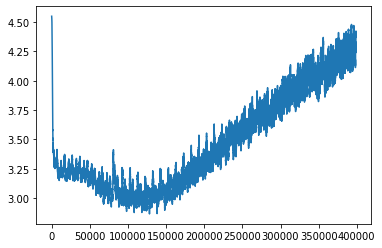 Basically, it went down for a while, and then it went back up a LOT. I still have no idea why this happened: if the optimizer was struggling to optimize, I’d expect the loss to get stuck and plateau and maybe wobble around, but not just keep going up forever. This makes no sense to me yet.

I drew a corresponding graph of the norm of the gradient of one of the weight matrices to go with this, because I kept reading about “vanishing gradients” and “exploding gradients” and I wanted to see if I was suffering from them. Here’s the graph: 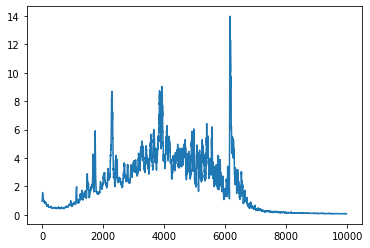 I think this graph might be showing me a vanishing gradient – the norm of the gradient does get pretty small towards the end of the graph.

I’ve been experimenting with a different way of training my RNN: instead of writing code like this, which trains one character at a time.

instead I’m giving it a bunch of data (ok, the sentence is ‘a’, ‘b’, ‘c’, ’d’, ‘e’, ‘f’… ) and then only doing the gradient descent/backpropagation step periodically. The code looks a little like this:

Some questions I have about this:

waiting for training to finish is frustrating

I’ve spent way too much time over the last couple of days waiting 30 minutes for a model to train so I can tell if it’s working or not. I’m not sure how to handle this yet, but I need either a faster feedback loop or something to do while I’m waiting.

I think the main reason this is frustrating is that I have a lot of hypotheses I want to experiment with, but it takes so long for every one and it’s a bit hard with a Jupyter notebook to keep track of all the hypotheses I’m trying to track.

should I be doing gradient clipping?

Recently I added “gradient clippling” to my training function. Basically I think this means that if the norm of the gradient is bigger than some value (like 1), then the optimizer scales the gradient so that it has a smaller norm.

It’s only one line of code, but I can’t tell if it’s helping yet

I’m just going to recap some of my open questions for myself in case I can answer them in the next post.

Maybe I can answer some of those questions next!

some text the BPTT model generated

This seems really similar to the non-BPTT text: