Hello! This week it’s generative art week at RC, and I thought it would be fun to generate drawings of faces.

Someone suggested the Google Quickdraw dataset, which has a lot of pictures of faces. And even though I think most of the faces in there are not really that interesting, I really quite like some of them, like these two:

step 1: get the sketch-rnn model

sketch-rnn is an RNN trained on the quickdraw dataset that generates line drawings. You can see it in action in Monica Dinculescu’s very fun magic sketchpad demo here – you start making a drawing, and it’ll complete you drawing as a cat / bridge / whatever you want.

I figured that would be a fun place to start, and ml5js has a tutorial showing how to write Javascript code to draw things with sketch-rnn, which I followed.

The ml5js example had a bunch of global variables and callbacks and I found it difficult to work with, so I spent a while refactoring it to use async/await so that I could play around with it more easily. This took a while but I got it to work.

step 3: make sketch-rnn draw lots of faces and put them into a gallery

I started out with making a more interactive website, but decided to instead do something really simple to start: just get the model to draw a lot of faces and see how I felt about them.

Here’s the resulting (very janky, not responsive) website I made, which draws faces and then puts them into a little “gallery” on the right: lots of sketch-rnn faces. You can see it “live” drawing the faces which is fun.

The set of images that comes out looks something like this: 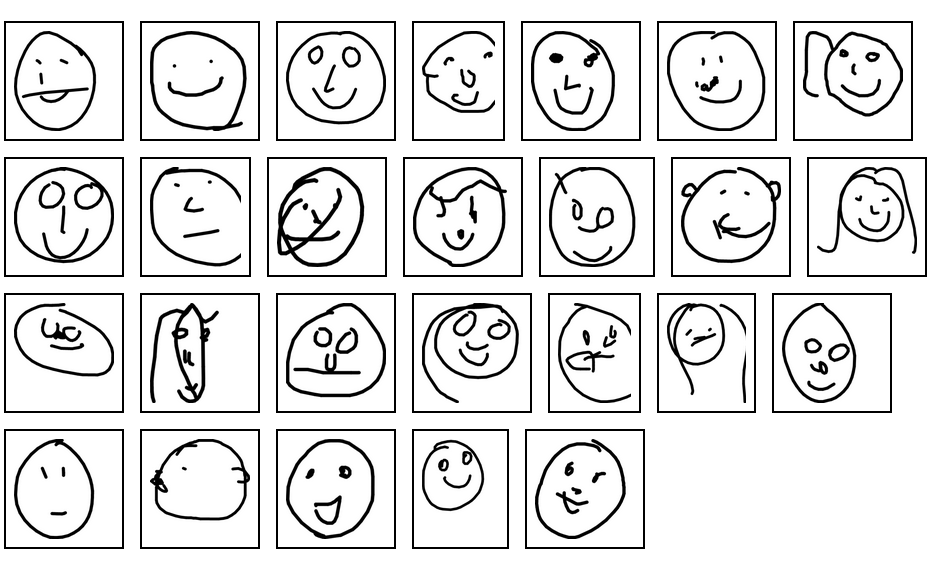 I don’t really like any of these faces, but it’s a start! It’s also very slow on my 2015 laptop, but faster on the iPad. I didn’t spend a lot of time profiling it, but it seems to spend a lot of time in some function with lstm in its name – I don’t know what an LSTM is exactly but I know it’s a component of an RNN, so I guess (as you’d expect) it just has a lot of math to do in Javascript to calculate the next line to draw and that’s slow.

next step: maybe find out if sketch-rnn can tell the difference between “interesting” and “boring” faces

I think that this face:

is a lot more interesting than this face:

Can I convince the neural network to distinguish between faces that I think are ‘interesting’ and ‘boring’ and maybe only generate more “interesting” faces? We’ll see! Right now I am stuck on trying to get a pre-trained model loaded into Python, so there’s a long way to go.

I did find someone who’d done something kind of similar, on bad flamingos vs good flamingos in the quickdraw dataset.

I still don’t really know anything about RNNs, but maybe if I can answer this question I will learn something about them.

Here’s that refrigerator poetry forum I was talking about last week: https://refrigerator-poetry-forum.herokuapp.com/. You can write magnet poetry-style poems on a refrigerator. People wrote some charming poems and I’m happy with it. I think I might use Rails for another project in the future.

Hopefully people won’t abuse it, if there’s abuse I’ll just take it off the internet probably.