Last month I switched my email to Fastmail. One fun thing about Fastmail is that they built a new protocol called JMAP which is much easier to use than IMAP. So over the last couple of days I built a fun tiny email feature for myself to use with JMAP.

The point of this post is mostly to give a simple end-to-end example of how to use the JMAP API because I couldn’t find a lot of examples when I was figuring it out. Here’s the github repo and a gist which shows how to authenticate & make your first request.

I tried the https://hey.com email service for a little bit when it came out. It wasn’t for me, but I liked their “focus and reply” feature. Here’s a screenshot of what it looks like (from a video on their marketing site page for the feature) 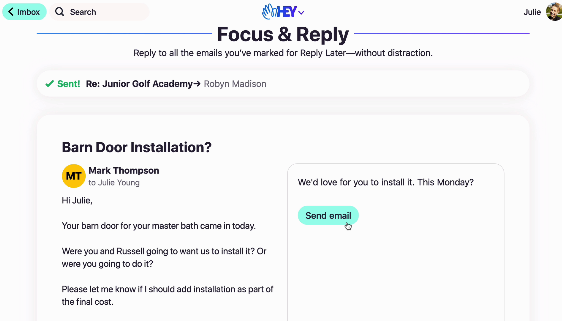 Basically it makes replying to a lot of emails in a batch a little simpler. So I thought – can I use JMAP to implement this focus & reply feature from Hey?

I was a bit too scared to actually send email to start (read-only is safe!), so I decided to start by just making a UI that would show me all the emails I needed to reply to and give me a text box to fill in the replies. Then I could copy and paste the replies into my webmail client to send them. This is a little janky, but I don’t mind it for now. 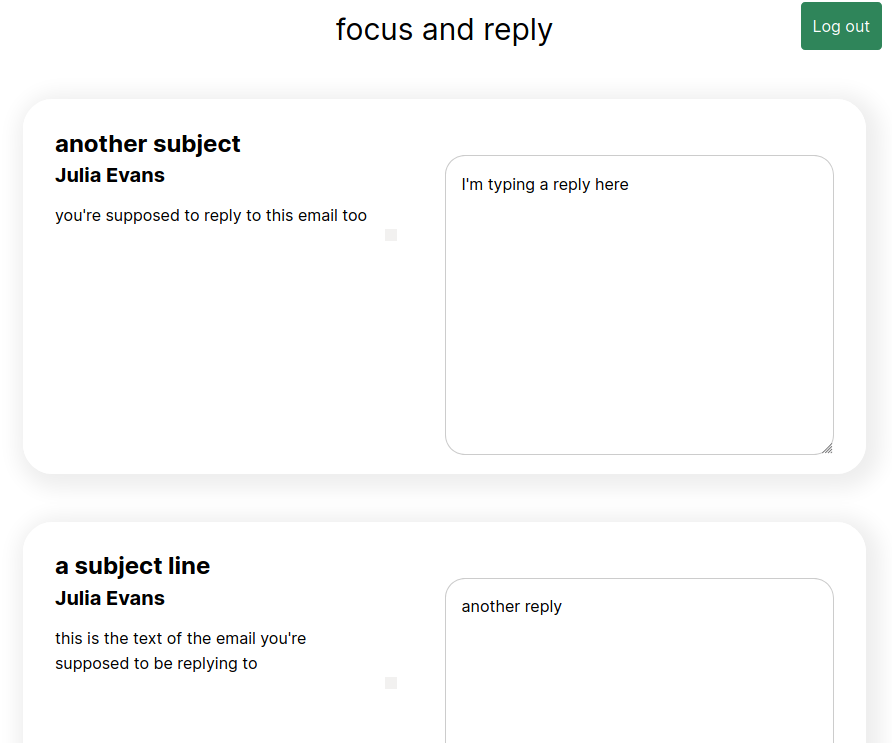 step 0.5: have a “Reply Later” folder in Fastmail

I already had a folder named “Reply Later” in Fastmail, where I manually filed away emails that I needed to reply to but hadn’t gotten to yet. So I had a data source to use! Hooray. Time to start coding.

step 1: get started with JMAP

I couldn’t find a quickstart guide for using JMAP with Fastmail and I was confused about how to do it for quite a while, so part of my goal with this blog post is to give an example of how to get started. I put all the code you need to make your first API request in a gist: fastmail-jmap-quickstart.js

You can authenticate all your requests with HTTP Basic authentication with your username and a Fastmail app password.

Here’s the basics of how it works.

For example, this is a request to get a list of all your mailboxes (folders). I think "0" is the ID of the request:

The API wasn’t that intuitive at first, but I was able to figure how to do what I wanted to by reading the spec at https://jmap.io.

step 2: get all my emails

Here’s the query I used to get my emails from JMAP. I basically just copied this from the examples in the JMAP documentation, but I think it’s interesting that it’s not just 1 query, it’s actually 5 different chained queries that build on top of each other. For example, you have:

This queries for a list of all the email IDs in a specific mailbox (my “reply later” mailbox), calls it t0, and then uses the results of t0 to request all of those emails.

One of the big ideas in JMAP seems to be this chaining – it really reduces latency if you can do all your work in a single request.

Once I had all the emails, rendering them was pretty easy – I just used vue.js + Tailwind. The whole thing came out to 170 lines of not-particularly-well-organized Javascript.

It works! It’s already helped me reply to some emails. The github repo is https://github.com/jvns/focus-reply-fastmail.

there are at least 2 problems with this code (and probably more):

fastmail seems to use JMAP in a different way than this

I got curious so I used the Network tab to look at how Fastmail’s web interfaces uses jmap.

some links to resources

this seems like a fun way to do email experiments!

I think the idea that anyone can just use JMAP to make fun email UI experiments without dealing with the Hard Parts of email is really fun!

And it’s really cool that I could get this to work 100% as a frontend app, without any server code at all! All the email data is accessible via JMAP, so it seems extremely possible to just do everything with JMAP requests from the client.