Hello! This post is about a mailing list (Saturday Comics) that I actually started a year ago. I realized I never wrote about it on this blog, which is maybe better anyway because now I know more about how it’s gone over the last year!

I think the main idea in this post is probably – if you want to have a mailing list that’s useful to people, but don’t have the discipline to write new email all the time, consider just making a mailing list of your best past work!

Let’s start by talking about some of the problems I wanted to solve with this mailing list.

problems I wanted to solve

I pretty much exclusively post draft zine pages to Twitter, but not everyone is on Twitter all the time. Lots of people aren’t on Twitter at all, for lots of very good reasons! So only posting my progress on my zines to Twitter felt silly.

problem 3: it was impossible to find my “best” work:

I have an idea in my head of what my “best” comics are, but there was literally no way for anyone else other than me to find that out even though I know that some of my comics are a lot more useful to people than others.

I also recently added https://wizardzines.com/comics/ as another way to fix this.

send my favourite comics, not the newest comics

Unlike this blog (where people can read my newest work), I decided to use a different model: let people see some of my favourite comics.

The way I thought about this was – if someone isn’t familiar with my work and wants to learn more, they’re more likely to find something interesting to them in my “best” work than just whatever I happen to be working on at the time.

So! I came up with “saturday comics”. The idea is pretty simple: you get 1 programming comic in your email every Saturday.

For example, the first email is called “bash tricks”, and so if someone signs up today, they’ll get the “bash tricks” email on Saturday.

You might notice that 29 is less than 52 and think “wait, you said this list has existed for a year!“. I haven’t quite kept up with 1 email a week so far. What happens in practice is that I’ll add 5 new emails, they’ll get sent out over 5 weeks, then subscribers will stop getting email for while, and then I’ll add more emails eventually and then they’ll start getting email again.

so far: 5000 people have subscribed, and people seem to like it!

5000 people have subscribed to the list so far, and people seem to like it – I pretty often get replies saying “hey, thanks for this week’s comic, I loved this one” or see people tweeting about how they loved this week’s email.

how it works: a ConvertKit sequence

The way I implemented it is with a ConvertKit sequence. Here’s an example of what the setup looks like: there’s a list of subject lines & when they’re scheduled to go out (like “1 week after the last email”), and then you can fill in each email’s content. I’ve found it pretty straightforward to use so far. 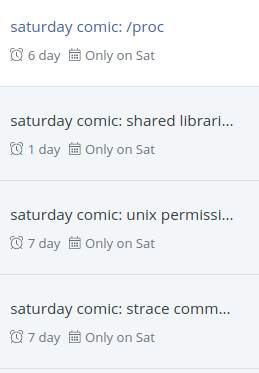 This list is sort of a marketing tool, but I’ve learned to think of marketing (at least for my business) as just building trust by helping people learn new things. So instead of worrying about optimizing conversion rates or whatever (which has never helped me at all), I just try to send emails to the list that will be helpful.

With every comic I include a link to the zine that it’s from in case people want to buy the zine, but I try to not be super in-your-face about it – if folks want to buy my zines, that’s great, if they want to just enjoy the weekly comics, that’s great too.

This idea of a mailing list where you send out your favourite work instead of your latest work was really new to me, and I’m happy with how it’s gone so far!