For the last few months, I’ve been working on and off on a way to help people evaluate their own learning & figure out what to learn next.

This past week I built a new iteration of this: https://questions.wizardzines.com, which today has 2 sets of questions:

It’s still a work in progress, but I’ve been working on this for quite a while so I wanted to write down how I got here.

the goal: help people learn on their own

First, let’s talk about my goal. I’m interested in helping people who are trying to learn on their own. I don’t have any specific materials I’m trying to teach – I want to help people learn what they want to learn.

I’ve done a lot of this by writing blog posts & zines, but I felt like I was missing something – were people really learning what they wanted to learn? How could they tell if they’d learned it?

I felt like I wanted some kind of “quiz” or “test”, but I wasn’t sure what it should look like.

Let’s take a very quick detour into terminology. There are two kinds of assessment teachers use in school.

(thanks to Sumana for reminding me of these terms!)

next step: ask on Twitter how people feel about quizzes

have you ever taken a class (online or offline!) where you were given a quiz first that you could use to check your understanding of the topic at the start? did it help you?

I got about 90 replies. Here are some themes I took away from the replies:

One thing I learned from this is that being told you don’t know something is a bad experience for a lot of people.

idea: build flashcards you can learn from

My first idea was to reframe a test as a way to learn. So instead of it being something that tells you what you don’t know (which, so what?), it helps you learn something new!

So I built a few sets of flashcards about various topics. Here’s the first set I built, flashcards on containers, if you want to try it out.

If you didn’t try it – it looks like this: 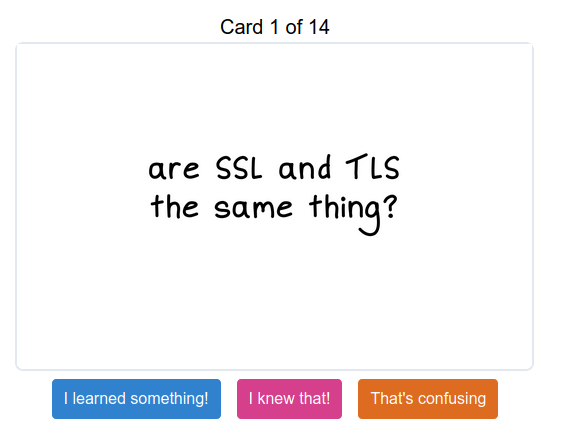 Basically – there are 14ish questions, you click the card to see the answer, and for each card you categorize it as “I knew that!”, “I learned something”, or “that’s confusing” (which is meant to be a kind of “other” category, where you didn’t know that and you didn’t learn anything).

The idea is that the answers contain enough information that you could actually learn a little bit from them, and hopefully be inspired to go learn more on your own if you’re interested.

good things about the flashcards

some of the positive feedback I got about the flashcards was:

problems with the flashcards

But there were some problems that were bothering me, too.

Probably the most important thing I learned from making these flashcards is that it really matters how well the question matches the reader’s mental model.

I started out by writing questions by taking statements I’d normally make about a topic, and turning them into questions. Sometimes this really didn’t work.

Here’s an example of it not working: I think the statement “a HTTP request has 4 parts: a body, the headers, the request method, and the path being requested” is relatively unobjectionable. That how I think about what a HTTP request is.

There were a lot of other examples like this, where people reacted badly to some question I asked that didn’t match up with how they think about a topic. So I learned that if I’m asking a question, it gets held to a higher standard for how well it matches with the reader’s mental model than when making the same statement.

An example of what I think would be a better question here is “Does every HTTP request have headers?” (yes! the HTTP/1.1 RFC requires that the Host header be set!). But even that is maybe a little tricky – probably at least one HTTP/1.0 client implementation is out there in the world sending requests without headers, even though 99.99% of HTTP requests have headers.

get rid of multiple choice

next step: get reminded of The Little Schemer

I don’t remember why, but I’ve had The Little Schemer kicking around in my head for a while. I haven’t actually read the whole thing myself, but I kept hearing people talking about it. Here’s the first page of The Little Schemer, if you haven’t heard of it: 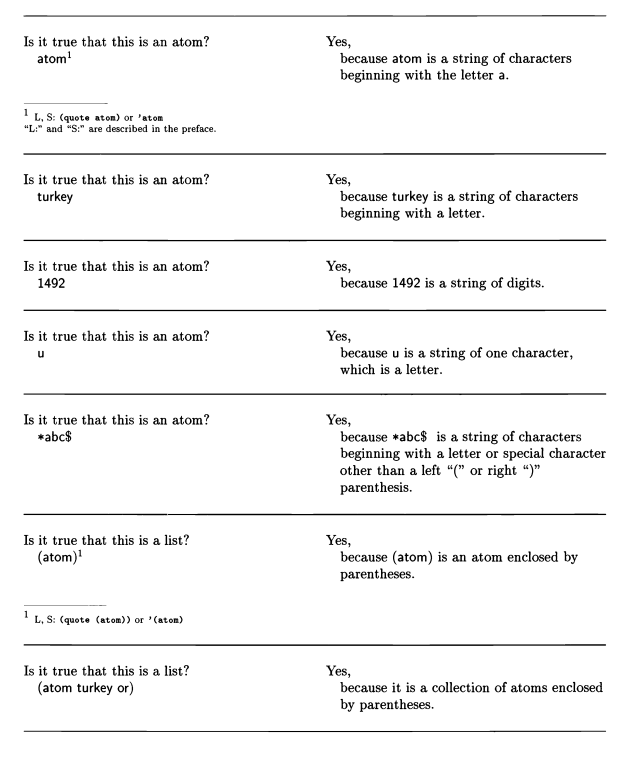 This reminded me a lot of what I was trying to do – there are questions and answers, but the goal isn’t for you to get all the questions “right”. Instead, I think the goal is for you to think about whether you know the answer yet or not and learn as you go.

switch to a side-by-side format

So, I kept a similar question/answer format, but switched to a side-by-side format, like the Little Schemer.

What I like about putting the questions & answers next to each other:

Basically I like that it gives the reader more control, which I think is important.

call it “questions” instead of “flashcards”

I also renamed the project to “questions” because that’s really how I think about learning for myself – I don’t do “flashcards”, but I do constantly ask myself questions about topics I don’t understand, figure out the answers to those questions, and then repeat until I understand the topic as well as I want to.

But coming up with the right questions on your own is hard when you don’t a lot, so I’m hopeful that providing folks with a bunch of questions (and answers) to think about will help you decide what you want to learn next.

keep the “I learned something” button

When I released the first set of questions on UDP, I didn’t include an “I learned something” button, and I noticed something weird – a lot of people were tweeting things like “I got 8⁄10”, “I got 10⁄10”.

I was a bit worried about this because the whole idea was to help people identify things they could learn, so saying “I got 8⁄10” felt like it was focusing on the things you already knew and ignoring the most important thing – the 2 questions where maybe you could learn something new!

So I added an “I learned something!” button back to each question and spent way too much time building a fun SVG+CSS animation that played when you pressed the button. And so far it seems to have worked – I see more people commenting “I learned something” and less “I got 9⁄10”.

As usual, building small simple things takes more time than I’d expect! The concept of “some questions and answers” seems really simple, but I’ve already learned a lot by building this and I think I still have a lot more to learn about this format.

But I’m excited to learn more, and I’d love to know your thoughts. Here it is again if you’d like to try it: https://questions.wizardzines.com.