Hello! Last week I posted a small programming challenge to write a tiny window manager that bounces windows around the screen.

I’ll write a bit about my experience of solving the challenge, or you can just skip to the end to see the solutions.

An X window manager is a program that sends messages to the X server (which is in charge of drawing your windows) to tell it which windows to display and where.

I found out that you can trace those events with xtrace. Here’s some example output from xtrace (for the toy window manager which is just moving windows about)

you can run programs without a window manager

and it’ll start the xterm. Here’s a screenshot of an X session with no window manager open. I even have 2 windows open! (chrome and an xterm). It has some major usability problems, for example I don’t think you can resize or move or switch between windows. Which is where the window manager comes in! 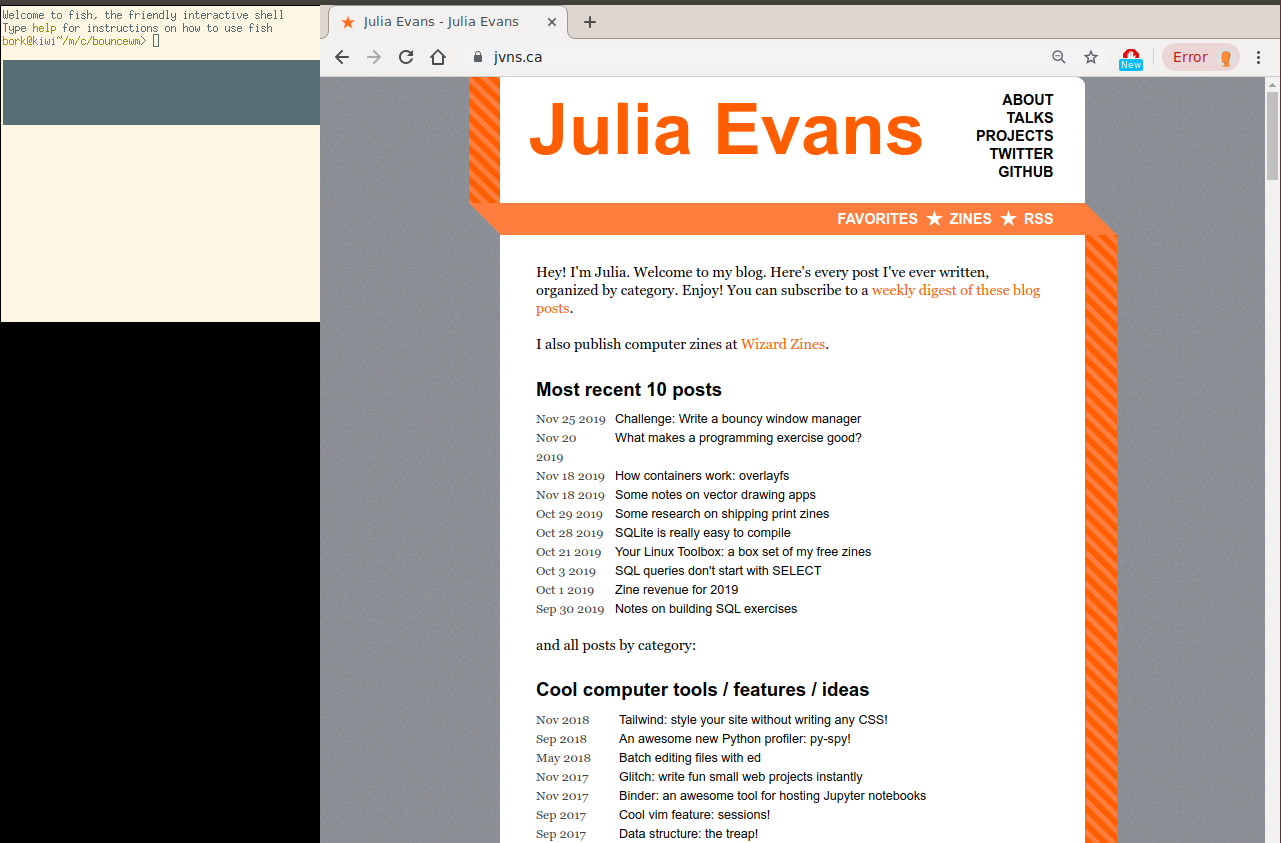 move a window with XMoveWindow

The challenge was to make the window bounce around the screen.

In the tinywm source they use XMoveResizeWindow to move and resize windows, but I found in the docs that there’s also a function called XMoveWindow. Perfect!

Here’s what it looks like. What could be simpler, right? And it works just the way I’d expect!

I ran into a problem (which I got stuck on for a couple of hours) where when I ran XMoveWindow twice, it would only apply the last move.

I used xtrace to trace the events and found out that my ConfigureWindow events that XMoveWindow was sending were all being sent at the same time. So it seemed like X was batching the events. But why?

I didn’t know why this was happening, but I emailed Julian about it and he pointed me in the direction of XSync, which forces X to process all the events you’ve sent it. Sure enough, I used XSync and everything worked beautifully.

I asked people to email me if they completed the challenge, and 4 people did! Here are their solutions. All the solutions I got implemented more features than I did, so I’d encourage you to look at all the solutions if you’re interested in how to solve this problem!

Here’s a gif of Alexsey’s solution. Apparently XQuartz on a Mac performs better than Xephyr!

And Aldrin’s solution, with a great use of xeyes: