I occasionally get questions like “Can you share what you’ve learned about running a business?” The most surprising thing I’ve learned is that it’s possible to make money by teaching people computer things on the internet, so I want to make that a little more concrete by sharing the revenue from the zine business so far in 2019. Here’s a graph of revenue by month (the last month is September 2019): 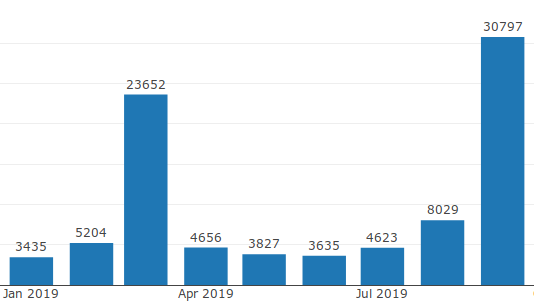 Until quite recently I’d been writing zines in my spare time, and now I’m taking a year to focus on it.

The most obvious thing in that monthly revenue graph above is that 2 months (September and March) have way more revenue than all the others. This is because I released new zines (Bite Size Networking and HTTP: Learn your browser’s language) in those months.

This September was the month with the most sales ever, which is mostly because of individual humans who find the zines useful (thank you!!).

The main expenses are paying illustrators and an accountant, a mailing list, and various books I buy to learn how to do things better. They probably come out to about 10% of revenue or so, and then there are taxes after that.

giving away free copies has been great

With the HTTP zine, like many of my previous zines, I’ve been giving away one free copy for every copy that people buy, so that people can get it even if $12 is hard for them to afford. I’m pretty happy with this setup – we’ve given away 1358 copies so far. (I think of this as kind of a “sales” statistic too)

I think I want to automate the system to give away free copies a bit more soon (like by automatically updating the number of free zines available using the Gumroad API instead of periodically doing it manually).

hopefully this is a useful data point!

Writing about money on the internet is weird, so this will probably be the first and last zine revenue post, but I’m writing it down in the hopes that it’s a useful data point for others. I thought for a long time that you could only really make money from writing on the internet with ads or sponsorships, but it’s not true!

The goal of this isn’t to say “you should run a business” or anything, just that this is a thing that’s possible in the world and that many developers do really value good educational materials and are happy to pay for them (if you’re one of those people, thank you!)