Hello! Someone on Twitter asked a question about tensor categories recently and I remembered “oh, I know something about that!! These are a cool thing!“. Monoidal categories are also called “tensor categories” and I think that term feels a little more concrete: one of the biggest examples of a tensor category is the category of vector spaces with the tensor product as the way you combine vectors / functions. “Monoidal” means “has an associative binary operation with an identity”, and with vector spaces the tensor product is the “associative binary operation” it’s referring to. So I’m going to mostly use “tensor categories” in this post instead.

So here’s a quick stab at explaining why tensor categories are cool. I’m going to make a lot of oversimplifications which I figure is better than trying to explain category theory from the ground up. I’m not a category theorist (though I spent 2 years in grad school doing a bunch of category theory) and I will almost certainly say wrong things about category theory.

In this post I’m going to try to talk about Seven Sketches in Compositionality: An Invitation to Applied Category Theory using mostly plain English.

If you have been around functional programming for a bit, you might see the word “monoid” and “categories” and wonder “oh, is julia writing about monads, like in Haskell”? I am not!!

There is a sentence “monads are a monoid in the category of endofunctors” which includes both the word “monoid” and “category” but that is not what I am talking about at all. We’re not going to talk about types or Haskell or monads or anything.

tensor categories are about proving (or defining) things with pictures 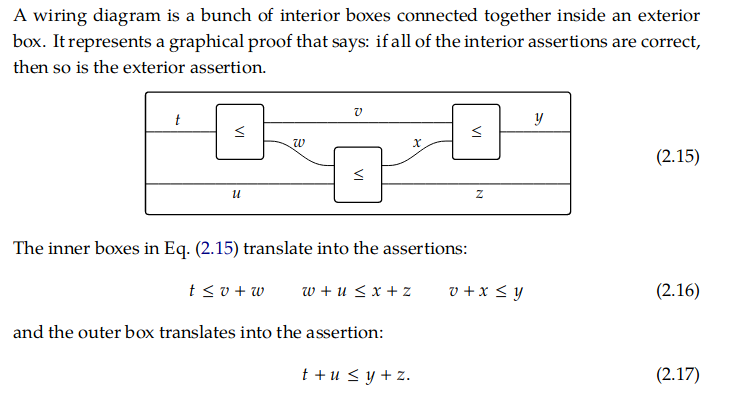 The idea here is that you have 3 inequalities

You can do this algebraically pretty easily.

But in this diagram they’ve done something really different! They’ve sort of drawn the inequalities as boxes with lines coming out of them for each variable, and then you can see that you end up with a t and a u on the left and a y and a z on the right, and so maybe that means that t + u <= y + z.

so saying that this picture proves that t + u <= y + z actually means that you can read a proof off the diagram in a straightforward way:

So all the things that “look like they would work” according to the picture actually do work in practice because our tensor product thing is associative and because addition works nicely with the <= relationship. The book explains all this in a lot more detail.

Proving this simple inequality is kind of boring though! We want to do something more interesting, so let’s talk about vector spaces! Here’s a diagram that includes some vector spaces (U1, U2, V1, V2) and some functions (f,g) between them. 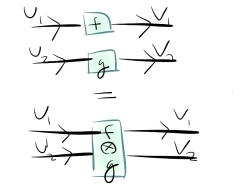 Again, here what it means to have U1 stacked on top of U2 is that we’re taking a tensor product of U1 and U2. And the tensor product is associative, so there’s no ambiguity if we stack 3 or 4 vector spaces together!

This is all explained in a lot more detail in this nice blog post called introduction to string diagrams (which I took that picture from).

define the trace of a matrix with a picture

So far this is pretty boring! But in a follow up blog post, they talk about something more outrageous: you can (using vector space duality) take the lines in one of these diagrams and move them backwards and make loops. So that lets us define the trace of a function f : V -> V like this: 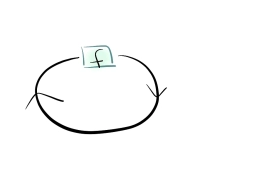 This is a really outrageous thing! We’ve said, hey, we have a function and we want to get a number in return right? Okay, let’s just… draw a circle around it so that there are no lines left coming out of it, and then that will be a number! That seems a lot more natural and prettier than the usual way of defining the trace of a matrix (“sum up the numbers on the diagonal”)!

When I first saw this I thought it was super cool that just drawing a circle is actually a legitimate way of defining a mathematical concept!

what does this have to do with programming?

Even though this is usually a programming blog I don’t know whether this particular thing really has anything to do with programming, I just remembered I thought it was cool. I wrote my master’s thesis (which i will link to even though it’s not very readable) on topological quantum computing which involves a bunch of monoidal categories.

Some of the diagrams in this post are sort of why I got interested in that area in the first place – I thought it was really cool that you could formally define / prove things with pictures. And useful things, like the trace of a matrix!

edit: some ways this might be related to programming

Someone pointed me to a couple of twitter threads (coincidentally from this week!!) that relate tensor categories & diagrammatic methods to programming: