Hello!! Latest update on my Ruby profiler: I published a documentation site!! It’s at https://rbspy.github.io.

I wanted to do a good job of this because my view about documentation is – if software isn’t well documented, it might as well not exist. I’ve spent SO MUCH time explaining other people’s software on this blog, so I figured it was extra important to make sure the software I write is well explained.

It has all the usual things: what is this software? How does it work? It also has a few extra things that I don’t always see on documentation sites though.

guide to profiling in general

The other extra thing I included is a small guide to profiling. This is because I’ve heard from a lot of people who want to make their programs faster that they’re confused about some of the basics of profiling – what’s the difference between a benchmark and a profiler? What’s a flamegraph and how do I interpret it?

All of this documentation could actually apply to any profiling tool, not just rbspy. Here’s are the pages from the guide to profiling:

how I made the docs site

I wanted to have a really simple, pretty minimalist site. Nothing fancy! I did want it to feel like there was a little bit of care put into it, though. Here’s how I did it.

I used Hugo, which is my favorite static site generator. It’s what I use for this blog as well.

Next, I used the Crisp theme, which I found by searching for “minimalist” on the Hugo themes site. It’s already responsive, which was good – I wanted the site to work on mobile.

Then I manually edited the HTML/CSS in theme a bit to get what I wanted. The main change I made was to add a hamburger menu on mobile to make it (hopefully) easier to navigate. I used this example. My CSS skills aren’t great (I’ve only written HTML/CSS for tiny projects like this) so I was pretty proud of myself for getting the hamburger menu working :)

Here’s what the site looks like on mobile! Look, responsive! :D 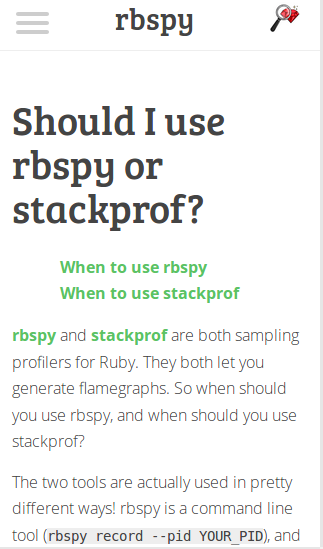 Let me know if you have questions about rbpsy!

If there are questions you have about using rbspy that this docs site doesn’t answer, please let me know!! I think documentation is really important, and if you have a question probably other people do too :). I’d love to add to the FAQ.