As much as I write about how there’s a lot more to ML than training models, the actual statistical models you use are still really important! And I find understanding the models I’m using helps me sleep a lot better at night. So we’re going to talk about one.

I only do classification right now. Classification means that you have a bunch of data with features (like (height = 5', weight = 150lb) and you want to put each piece of data into a box (like assigned {female, male} at birth). We’re only going to talk about classification where there are 2 categories.

Logistic regression means that fit a linear model to your data (like 0.5 * height + 0.1 * weight). This gives you a real number, like 17.5. But 17.5 isn’t a classification, it’s just a number! So we put the number into the logistic function 1 / (1 + exp(-x)) which normalizes everything to be between 0 and 1. Then you can interpret the number you get as a probability! In the case of 17.5, you can see from the graph below that it corresponds to a probability of effectively 1. You can interpret this as “we’re 100% sure that this data is labelled with F”. (assuming 1 corresponds to F and 0 to M). 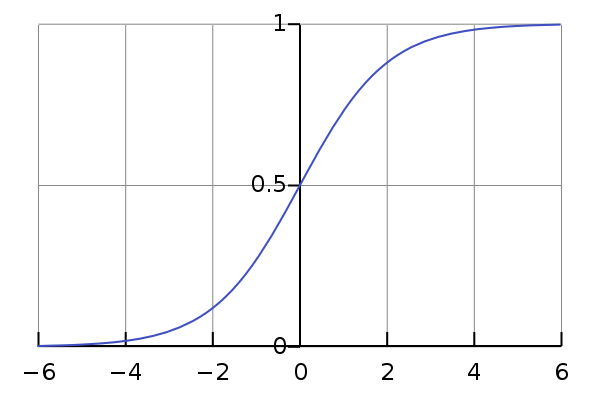 This doesn’t always feel as satisfying as using Real World Data, but it’s a much better way to think about your assumptions.

Let’s do it in code!

There’s of course no reason to expect that the target values would be evenly distributed between True and False – I mucked with the coefficients to make them that way.

Let’s see some of this data on a graph:

You can see that there’s a separation between the True and False data, but a lot of it is mixed up together. This is because that there were a lot of points that had a probability of ~50% of being True.

You can also imagine having much better separation between the data, like this:

Here’s the model-fitting code. It

I’m glossing over all the math here, but “fitting the classifier” in this case means “do a maximum likelihood estimate to find the best coefficients, using gradient descent”. Not totally sure about the gradient descent.

Let’s look at what our model predicted!

Interesting! It’s much easier to understand what the logistic regression is doing now – it’s choosing a line, and classifying everything on one side of that line as True and everything on the other side as False.

Did the model fitting work?

There are a couple of ways to think about this.

Just by inspecting them, you can see they’re pretty similar. You can formalize this a bit more by looking at the confusion matrix:

For each data point, as well as getting a classification (True or False), we actually get a probability. Do those probabilities make sense?

What does “make sense” mean? Well, let’s say I have a data point which is assigned a probability of 0.8. Then I’d expect 80% of those points to be Trues (or orange) and 20% to be Falses (or blue). Let’s find if that’s true! We’ll plot the score vs the actual proportion of Trues. (thanks to Avi for suggesting that I start drawing this graph!)

This graph is BEAUTIFUL. It is basically a perfect straight line. I could not dream of a more beautiful graph. I have never yet seen a graph this nice for actual data. (actual data doesn’t care what you think the model is :( ).

This is what I meant when I said that we have Mathematically Perfect data – not that the data lets you easily perfectly separate the two classes (it doesn’t!), but that it fits the assumptions of the model.

That’s all I have to say about logistic regression for now! I’m still working some of these things out, and if I’ve gotten anything terribly wrong I’d love to know about it.

If you’re interested in reproducing this you can see the code for it here.

Questions I still have that I’d love answers to: