This morning I worked with Allison, one of the HS facilitators. I have previously mentioned that Allison is amazing – she’s working on this super fun Python bytecode interpreter called byterun that I blogged about a few weeks ago.

Today we worked a bit on testing this TCP client that I’m writing. As a connection happens, the client goes through a series of internal states ("CLOSED", "SYN-SENT", "ESTABLISHED", etc.), and I wanted to check that it was going through the right states.

Allison had the amazing idea of subclassing my socket class to log every time I set the state attribute. Here’s what that looks like:

So we override __setattr__ to log the value every time we change self.state. This also made me want to learn Python 3 – apparently this super() business is much nicer is Python 3.

This means I can then write a test saying

I also talked with Mary about redesigning the handle() function I complained about yesterday, but I still haven’t had the courage to change it again. It will happen!

In the afternoon, there was a fantastic lecture by Stefan Karpinski about floats. The key thing I learned there is that there are a finite amount of 64-bit floats (2^64 of them!). Which is obvious in retrospect, but I hadn’t thought about it before.

We talked about gradual underflow and epsilons and rounding and it was fantastic. knowledge++.

I talked to Philip Guo, the resident for this week, for a while. We played with the idea of taking people’s history files and using them to

We talked in particular about looking at

I find it really interesting how I learn about command line tools largely through social interactions and folklore, and rarely by reading documentation or man pages.

A great example of a novice-teaching session is this part of my history file, from when I was pairing with Jari who understands tools like netstat and tcpdump. I don’t necessarily remember what all the options do, but since I have that history I can refer back to it and read up on -a, -n, -u, and -p, which is much more manageable than reading the netstat man page.

After we talked, I put together a graph of which Git commands I transition to from other commands. The thickness of the arrow indicates how many times I move from one command to another. There isn’t really enough data to make conclusions from this, but it’s neat.

You can look at the notebook and try it out yourself. Here’s the picture! 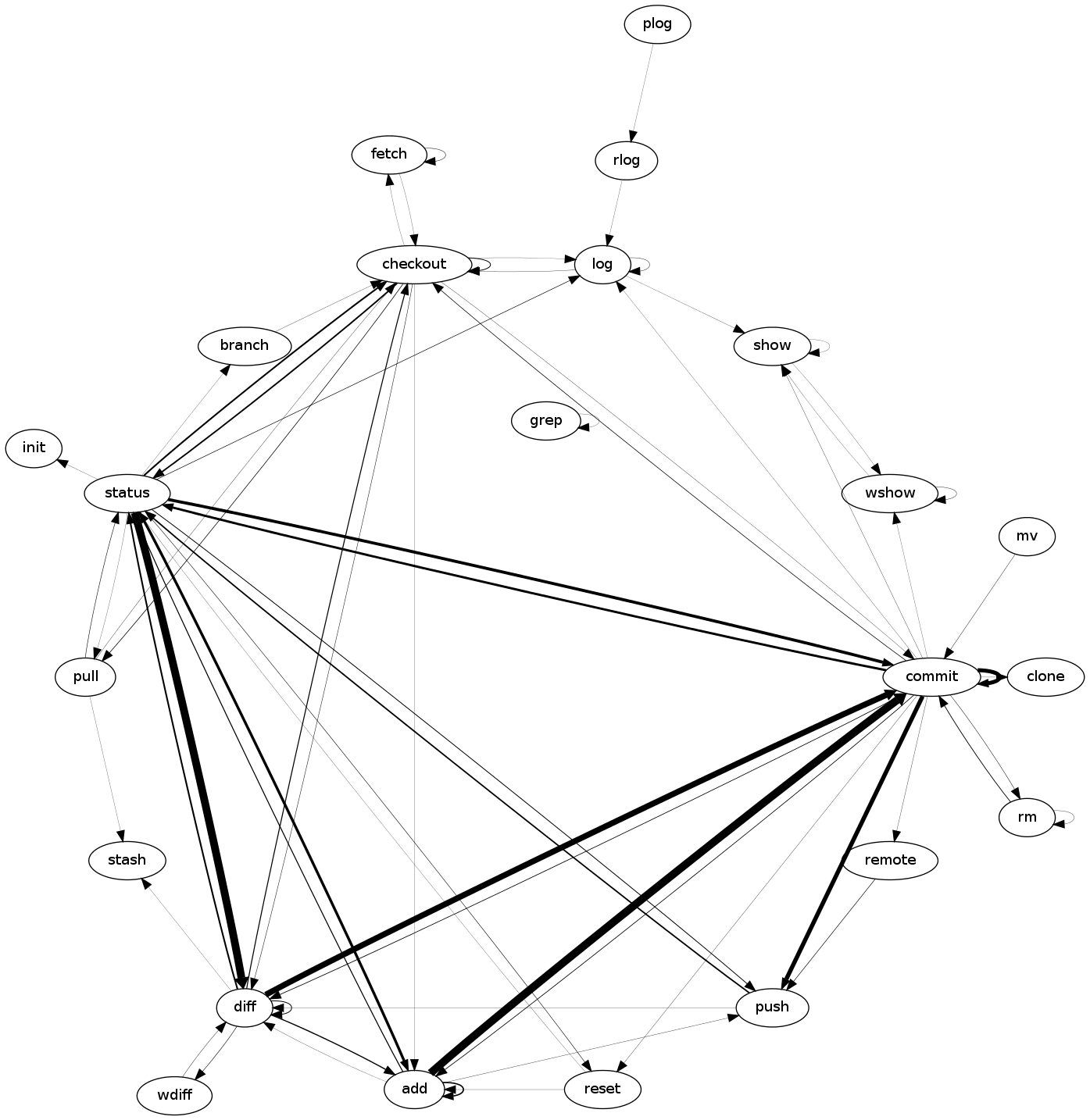