I’ve been confused about what’s going on with terminals for a long time.

But this past week I was using xterm.js to display an interactive terminal in a browser and I finally thought to ask a pretty basic question: when you press a key on your keyboard in a terminal (like Delete, or Escape, or a), which bytes get sent?

As usual we’ll answer that question by doing some experiments and seeing what happens :)

First, I want to say that displaying a terminal in the browser with xterm.js might seem like a New Thing, but it’s really not. In the 70s, computers were expensive. So many employees at an institution would share a single computer, and each person could have their own “terminal” to that computer.

For example, here’s a photo of a VT100 terminal from the 70s or 80s. This looks like it could be a computer (it’s kind of big!), but it’s not – it just displays whatever information the actual computer sends it. 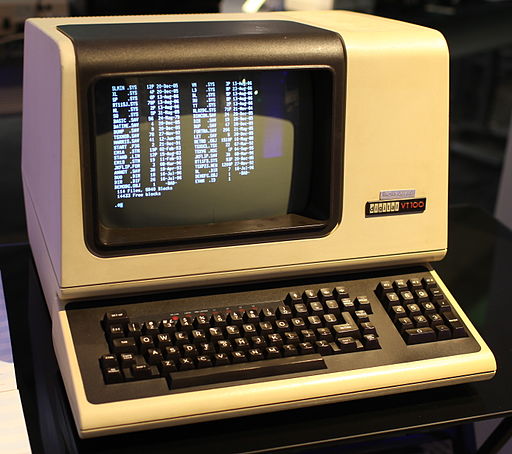 Of course, in the 70s they didn’t use websockets for this, but the information being sent back and forth is more or less the same as it was then.

what information gets sent?

It’s obvious that if you want to connect to a remote computer (with ssh or using xterm.js and a websocket, or anything else), then some information needs to be sent between the client and the server.

Let’s look at a real program that’s running a remote terminal in a browser and see what information gets sent back and forth!

we’ll use goterm to experiment

I found this tiny program on GitHub called goterm that runs a Go server that lets you interact with a terminal in the browser using xterm.js. This program is very insecure but it’s simple and great for learning.

I forked it to make it work with the latest xterm.js, since it was last updated 6 years ago. Then I added some logging statements to print out every time bytes are sent/received over the websocket.

Let’s look at sent and received during a few different terminal interactions!

First, let’s run ls. Here’s what I see on the xterm.js terminal:

I noticed 3 things in this output:

Next, let’s see what happens when we interrupt a process with Ctrl+C. Here’s what I see in my terminal:

And here’s what the client sends and receives.

When I press Ctrl+C, the client sends \x03. If I look up an ASCII table, \x03 is “End of Text”, which seems reasonable. I thought this was really cool because I’ve always been a bit confused about how Ctrl+C works – it’s good to know that it’s just sending an \x03 character.

I believe the reason cat gets interrupted when we press Ctrl+C is that the Linux kernel on the server side receives this \x03 character, recognizes that it means “interrupt”, and then sends a SIGINT to the process that owns the pseudoterminal’s process group. So it’s handled in the kernel and not in userspace.

Let’s try the exact same thing, except with Ctrl+D. Here’s what I see in my terminal:

And here’s what gets sent and received:

It’s very similar to Ctrl+C, except that \x04 gets sent instead of \x03. Cool! \x04 corresponds to ASCII “End of Transmission”.

what about Ctrl + another letter?

Next I got curious about – if I send Ctrl+e, what byte gets sent?

It turns out that it’s literally just the number of that letter in the alphabet, like this:

Also, Ctrl+Shift+b does the exact same thing as Ctrl+b (it writes 0x2).

What about other keys on the keyboard? Here’s what they map to:

What about Alt? From my experimenting (and some Googling), it seems like Alt is literally the same as “Escape”, except that pressing Alt by itself doesn’t send any characters to the terminal and pressing Escape by itself does. So:

Let’s look at one more example!

Here’s what gets sent and received when I run the text editor nano:

These \x1b[ things above that nano is sending the client are called “escape sequences” or “escape codes”. This is because they all start with \x1b, the “escape” character. . They change the cursor’s position, make text bold or underlined, change colours, etc. Wikipedia has some history if you’re interested.

As a simple example: if you run

in your terminal, it’ll print out “hi there” where “hi” is in red and “there” is in black. This page has some nice examples of escape codes for colors and formatting.

I think there are a few different standards for escape codes, but my understanding is that the most common set of escape codes that people use on Unix come from the VT100 (that old terminal in the picture at the top of the blog post), and hasn’t really changed much in the last 40 years.

can you type in escape sequences manually?

And if I manually type Escape, then [, then H in the xterm.js terminal, I end up at the beginning of the line, exactly the same as if I’d pressed Home.

I noticed that this didn’t work in fish on my computer though – if I typed Escape and then [, it just printed out [ instead of letting me continue the escape sequence. I asked my friend Jesse who has written a bunch of Rust terminal code about this and Jesse told me that a lot of programs implement a timeout for escape codes – if you don’t press another key after some minimum amount of time, it’ll decide that it’s actually not an escape code anymore.

terminal encoding is kind of weird

I want to pause here for a minute here and say that the way the keys you get pressed get mapped to bytes is pretty weird. Like, if we were designing the way keys are encoded from scratch today, we would probably not set it up so that:

But all of this was designed in the 70s or 80s or something and then needed to stay the same forever for backwards compatibility, so that’s what we get :)

Not everything you can do in a terminal happens via sending bytes back and forth. For example, when the terminal gets resized, we have to tell Linux that the window size has changed in a different way.

Here’s what the Go code in goterm to do that looks like:

This is using the ioctl system call. My understanding of ioctl is that it’s a system call for a bunch of random stuff that isn’t covered by other system calls, generally related to IO I guess.

syscall.TIOCSWINSZ is an integer constant which which tells ioctl which particular thing we want it to to in this case (change the window size of a terminal).

this is also how xterm works

In this post we’ve been talking about remote terminals, where the client and the server are on different computers. But actually if you use a terminal emulator like xterm, all of this works the exact same way, it’s just harder to notice because the bytes aren’t being sent over a network connection.

that’s all for now!

There’s defimitely a lot more to know about terminals (we could talk more about colours, or raw vs cooked mode, or unicode support, or the Linux pseudoterminal interface) but I’ll stop here because it’s 10pm, this is getting kind of long, and I think my brain cannot handle more new information about terminals today.

Thanks to Jesse Luehrs for answering a billion of my questions about terminals, all the mistakes are mine :)